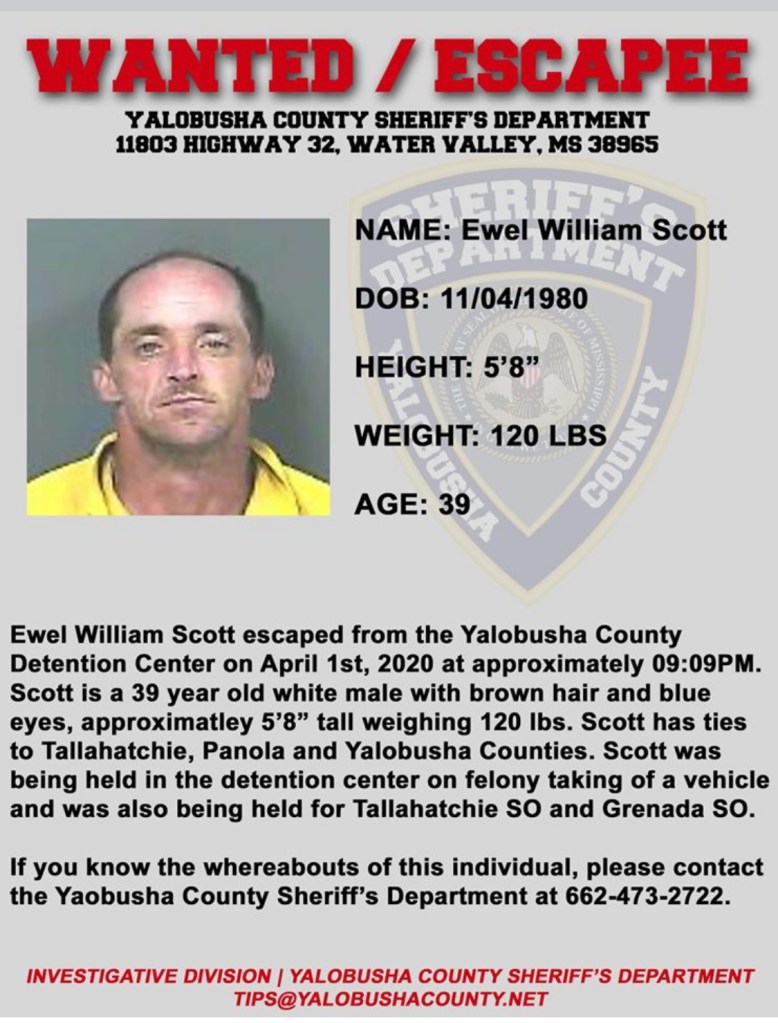 Panola County Sheriff Shane Phelps led another intense manhunt Thursday night for a Water Valley man who escaped from the Yalobusha County Detention Center April 1 and has remained on the loose since then with deputies from several counties and state agencies searching  for him in a rural area in southeast Panola County.

Ewel William Scott, 39, escaped nine days ago and officers from Yalobusha and Tallahatchie Counties spent a week following tips of sightings and watching houses of people who had known connections with the man.

Scott was seen in the general area of Pope and Enid a few times and deputies from Yalobusha and Tallahatchie expected he would “slip up” and be easily captured in the first few days after his escape, but soon realized that bringing him in would be more of a chore than expected.

Phelps was contacted Tuesday evening by officers who had been looking for Scott and following up on tips from alleged sightings. A stolen side by side vehicle was found, along with some food supplies and sleeping bag, giving pursuers a better idea of the escapee’s location, and Phelps was contacted to coordinate a search using tracking dogs.

Panola County deputies, along with officers from the other counties tracked Scott much of Tuesday night before calling off the search when the canines became exhausted and could not longer effectively track. Phelps said as information about the convict was gathered, officers realized the man’s familiarity with the landscape and his physical stamina allowed him to stay ahead of the tracking dogs.

By Wednesday evening the search had waned again. On Thursday, officers continued to question area residents for clues and rode the back roads hoping to spot Scott moving again. About 9:15 p.m. Thursday Phelps got word a homeowner saw someone attempting to steal his ATV from a residence along Pope-Crowder Rd. and deputies and state agents quickly mobilized again and brought the rested tracking dogs back to the scene.

Deputies from DeSoto County arrived with high-tech drones fitted with night vision cameras and heat-seeking radar concentrating their search in an area surrounding the bridge that crosses the Yocona River on Pope-Crowder Rd. Several times Tuesday night dogs picked up Scott’s trail and deputies walking the fields and river banks found a few fresh footprints, but the 39-year-old fugitive was able to cross the river and stay ahead of his followers.

As the night turned cooler and with several confirmed crossings of the river, deputies were hopeful their constant pursuit of a tired, wet runner would result in his surrender or slow him enough for lawmen to overtake. Phone calls from homeowners reporting their own dogs barking prompted deputies to rush to several houses and farm shops, hoping to catch Scott in a barn or outbuilding.

Dozens of buildings, pieces of old farm equipment, junk vehicles and similar hiding places were searched in the area to no avail.  At 4 a.m. Friday, Phelps announced he was suspending the search for the night when the drones and tracking dogs yielded no more leads.

Phelps said it was frustrating to suspend the search because deputies were certain their prey was within a few miles, and suspected he had been watching the search from wood lines part of the evening. “We did everything we possibly could with the tools we have and the manpower, but unfortunately this guy just doesn’t want to be brought in and he’s putting up a fight,” Phelps said. “We will get him, it’s just a matter of time,and I’m sure he knows it, too.”

Phelps said officers from all three counties will continue to patrol the area and listen for tips. “It’s been about 10 days and he is still in this area so we don’t think he has any intention of running far,” he said.

The sheriff would not say if he believes Scott is getting aid, including dry clothes and food, from people in the area who are related or friends. “I can’t say that, but it’s not likely that he’s been running on adrenaline alone,” he said.

Deputies found evidence that Scott has burglarized a deer camp in the area, and perhaps has entered homes when the residents were away for food and supplies. “Everybody in this area knows we are looking for the suspect and homeowners by now are watching their property close. Somebody will see him and report it and we’ll be right there on him to he’s brought in,” Phelps said.

Scott has been arrested multiple times for theft and larceny and has never been charged with a violent crime. Officers are cautious, but don’t believe the escapee poses real physical threats to the residents of the area.

“I’m not overly concerned about him hurting someone, but at the same time this is a man that is on the run and there’s always the chance people will do something they normally wouldn’t to keep from going back to jail,” Phelps said Wednesday before the large manhunt Thursday night.

The sheriff said during the early morning hours of Wednesday he thinks the search team was fairly close to Scott because they found snack wrappers and a Sprite can that had not been open very long.

“He had broken into a deer camp and got some groceries and kept on moving,” Phelps said. “This guy has connections in all three of our counties and somebody saw him in (the town) Enid,” Phelps said. “We are asking anyone that sees him to call their local sheriff’s office and they will report it to the search team.”

Phelps said Panola County citizens are not in imminent danger, but all citizens should be aware there is a manhunt underway and be certain all doors to houses and shops are locked.

State positive cases not in decline yet, Panola add…