1 new positive in Panola, but not from hospital tests; 5 in Lafayette now 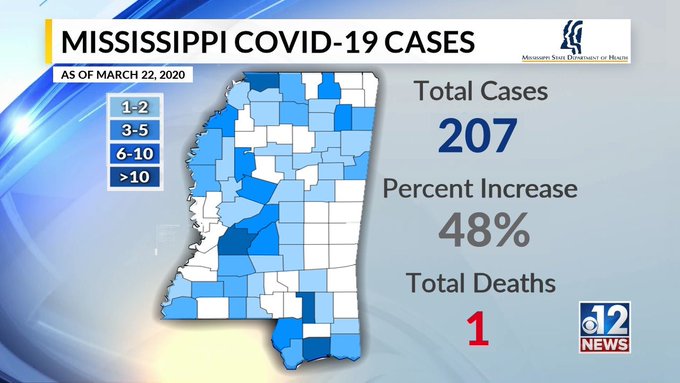 The graphic above, from the WJTV graphic department shows where the cases are in Mississippi as of the latest reporting by the Miss. State Dept. of Health.

Panola County has another case of Coronavirus. The information was released from the State of Mississippi Department of Health this morning.

Panola Medical Center COO Chris Ware said the hospital was not informed of the positive test before the list was made public, meaning that the person who tested positive was not seen at Panola Medical and the test was not performed locally.

The first positive case in Panola County, reported officially last Wednesday (March 18), was also from a test performed at a facility in a neighboring county. The Batesville hospital has a drive-up system for testing and has sent several samples to LabCorp, and has received at least one negative result, but no positives.

Lafayette County had three new cases on the list and now have a total reported 5 in the county.

The total reported in the state is now 207. That’s 48 percent more than Saturday’s number of 140 yesterday. Friday’s number was 80.

Panola County and Batesville City officials are aware of the new numbers and are in communication about any further steps needed locally to protect the population. The newspaper will update any developments from those elected boards throughout the day.

The link below is the actual release from MSDH and has the breakdown of all the county totals in Mississippi.