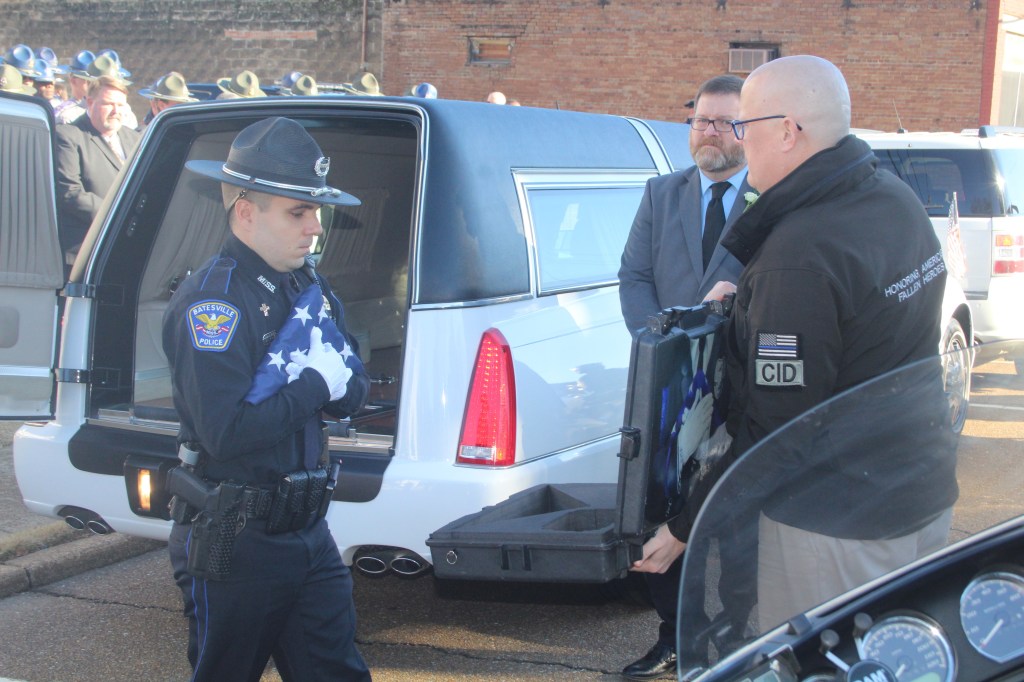 Batesville Police Department Officer Wesley Hawkins clutches The Honor Flag as he prepares to return it to its secure carrying case held by Chris Heisler, who travels to funerals of officers killed in the line of duty with the special flag.

Visitation to the public was open four hours Tuesday night at First Baptist Church of Batesville while hundreds filed past the slain officer’s casket. During the evening, officers from around the area volunteered to stand Casket Watch in 15 minutes increments.

Following the visitation, the hearse bearing Hawkins’ body led a caravan of police vehicles from numerous departments in a Sea of Blue display through Batesville and back to Wells Funeral Home to await the Wednesday funeral.

At that service, Justice Court Judge Charlie Baglan remembered Hawkins as an officer who became a friend to almost every person he met, even those to whom his job as Constable required him to deliver legal papers that often bore troublesome news for the served.

Baglan told the full sanctuary he admired Hawkins’ natural ability to see the good in people, and desire to make each person as comfortable as possible when his duties had him serving official papers.

The judge said that while the county Board of Supervisors will make an appointment of a new constable for District 2, Hawkins would never be replaced.

Rev. Allen McGraw, who served as Hawkins’ pastor at Courtland Baptist Church for many years, recalled Hawkins as a follower of Jesus and a person always seeking ways to help others, especially those with physical needs.

Reading from the New Testament, Matthew 25, the pastor said the portions of scripture that speak of feeding the hungry, clothing the naked, and giving drink to the thirsty were patterns of life for Hawkins.

McGraw recalled that Hawkins enjoyed practical jokes, once raising the church’s pulpit about a foot when the new pastor was to deliver his first sermon. The new pastor – who, like Hawkins, was short in stature – could barely see over the top to the great delight of his prankster parishoner.

There were tears, but also much laughter, during the service. The church, beautifully decorated for Christmas, fell silent as the service drew to a close with the ceremonial Last Call for fallen officers.

Mourners sat quietly as a Panola County dispatcher keyed her mic and called for Panola C2. She repeated the call twice more, and there were sniffles and a few sobs when only silence met her call.

Finally, she read a statement: “Constable Raye Hawkins Badge No. 2, Panola C2, may you rest in peace knowing your honor and legacy will continue on with all of us.”

The DeSoto County Drum & Fife Corps then marched to the front of the church playing soulful bagpipes, and escorted the casket to the waiting hearse.