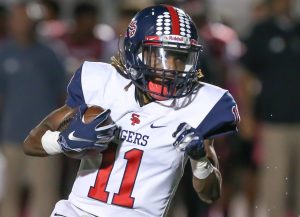 The South Panola Tigers gave host Germantown High School a rude introduction to Class 6A football with a 35-7 thumping of the Mavericks Thursday night at Gluckstadt.

Quarterback Anterrio Draper threw  two touchdowns passes and Artie Bobo ran for two scores as the No.6 ranked Tigers (7-1, 2-1 in Region 2) took a commanding 28-0 lead after three quarters of play.

Germantown’s only score came in the third quarter on a botched fumbled punt snap in the end zone.

After missing a 34-yard field goal on their opening possession, the Tiger offense got rolling on its next series as Bobo, running out of the Wild Tiger’offense, scored on a four-yard run with 2:29 left in the first quarter.

Bobo added his second touchdown of the game midway through the second quarter on a 17-yard jaunt with Nathan Walls booting the PAT to give the Tigers a 14-0 lead.

The drive was set up after Germantown turned to ball over on downs on their own 18 yard-line.

Bobo finished the game with 124 yards on 11 carries to go along with one catch for 11 yards. The senior also added a 56-yard kickoff return.

South Panola increase  its lead to 21-0 in the third quarter as Draper connected with Cameron Wright on a nine-yard pass at the 9:08 mark to complete a seven-play, 60-yard drive with Walls adding the PAT.

Germantown put together its only successful drive of the game on a lengthily 13-play, 71-yard drive to the South Panola two yard line, but was turned away on fourth down at the Tigers 10.

South Panola capitalized on the opportunity by marching 90 yards on five plays as Nate Harris plowed into the end zone from 12 yards out for a 28-7 advantage.

The Tigers put the icing on the cake with 6:06 left in the game when Draper connected with Martez Clark on a 30-yard touchdown strike. The drive started after a Wes Morgan interception.

Behind the offensive line of Daunte Carr, Markevian Jones, Quin Hodges, Dorian Baker and Antonio Victom, the Tigers rushed for 297 yards on night.

Clark followed Bobo in the rushing category with 86 yards on 15 carries.

Wright led the receiving corps with six catches for 58 yards with Ricky Farmer, Bobo and Clark adding one catch each.

With the new Region 2A alignment, the Tigers are getting used to long travel for away games, and so are their followers.