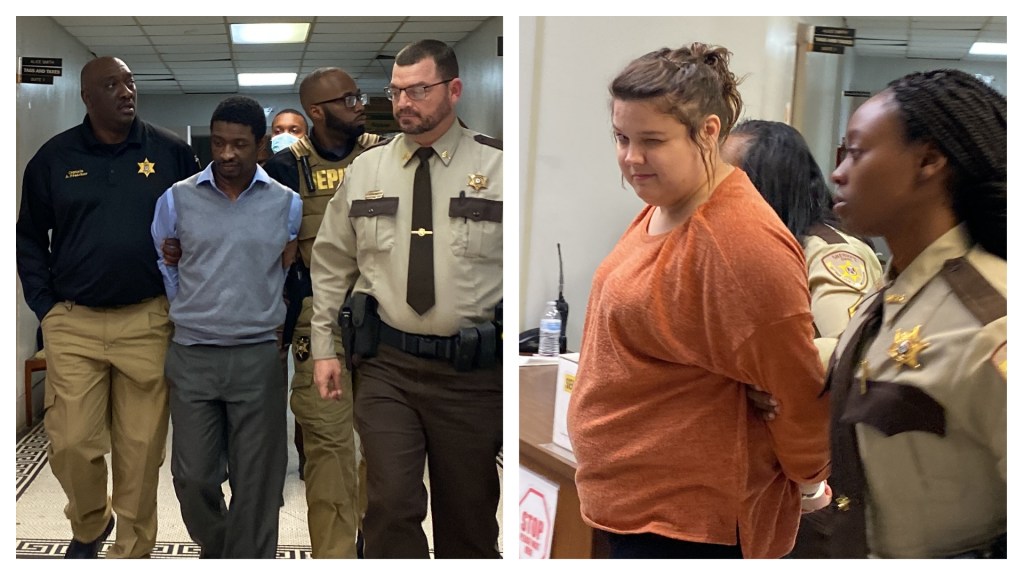 Editor’s Note: This article and more about last week’s trial can be found at www.darkhorsepressnow.com. The victims in the case had close Panola County ties. Some of the investigation took place in Crowder.

As Keith Coleman Jr. referenced his sexcapades with a woman he would decapitate within roughly 48 hours and extolled his own righteousness for according to him, “taking the rap” for his child’s mother from a witness stand in Quitman County, he had no idea his kingdom was crumbling around his ears.

It was a realm almost nobody outside of the underbelly of Quitman County, a county of roughly 6,100 people at the 2020 census, even knew about and it was built on the drugs he sold out of a locked room in a trailer. Nonetheless, in his testimony he drew himself to be a virile and untouchable goon king, and prevailed with fists, firearms, and fear.

Also known as K2, Coleman was convicted along with Jayme Lynn Tubbs on Friday of two counts of murder and two counts of desecration of a corpse in the grisly shootings and dismemberments of April Jones, 36, and Will Polk, 23, both of Crowder.

Testimony in the four-day trial brought out that Coleman thought Jones had stolen some methamphetamine from a home he frequented after the two had a sexual encounter there alone in October of 2019.

Tubbs, another of Coleman’s alleged sexual conquests, didn’t like Jones anyway because her boyfriend “Lil’ Dusty” had cheated on Tubbs with her. According to Chief Deputy Peter Clinton, Tubbs thought Jones needed to die for that, but also because she was believed to be a snitch.

Police and witnesses had told only one story of Jones’ and Polk’s last hours until Coleman’s testimony in the four-day trial: On the night of October 9, Tubbs picked up Jones and Polk and took them into a rural area near Coleman’s house where Chelsea Golden, the mother of one of Coleman’s children, was standing by her car. Coleman had popped the trunk so it would look like she had broken down and Coleman had hidden in the woods. Tubbs had texted Coleman to let him know that Polk had come along because he wasn’t a target, and the plan proceeded anyway.

Coleman dragged Jones from the car and beat her, telling the court he stopped “about the time I got tired.” He then shot her continuously as she ran away, continuing to shoot “because she wouldn’t go down,” Clinton testified he said. Later on it came out in court that he told police eight times that he shot her as many times as he did because she wouldn’t fall.

When a terrified Polk said, “I’m not going to tell,” Coleman said, “I know.” Then he shot him in the chest without another word.

The jury listened, many with apparent varying degrees of disgust and incredulousness, as Coleman told an entirely different story of that night. He said it was Golden who had pulled the trigger, shooting Polk in the face and Jones because she ran. He told the story with the effect of someone who simply expected to be believed as he detailed how he decided at that moment to take the rap for his child’s mother.

And yet, even as they stood at that scene, she was nursing a broken jaw from when he had recently beaten her. The night of the murders, Tubbs was driving a vehicle that belonged to Rachel Russell, another of Coleman’s conquests. Recently both Golden and Wheeler, who for years had both lived together with Coleman, had separately found videos on his phone of him “tricking off” with at least four different women. Wheeler testified that he had broken her nose before, and that he was known to beat her and Golden both when they didn’t do what he told them to.

Coleman, however, told the court he’d “made an agreement” with Golden, Tubbs, and Dezimond “Cutthroat” Green, who was also there that night, to be the one to take the fall if everything went sideways since he was the one who wanted to “beat April’s ass.” As he testified, he spoke as though it was a given that he simply honorably upheld that promise by confessing to Clinton in June 2021.

“I’m not going to call the cops on my baby’s mama,” he told the court.

When asked why he would take the blame for Golden, he said it was because he felt bad because he knew he hadn’t been a good partner, describing himself as a “a dog, a screw-up, a sex fiend” who had “two sex dolls in my closet at the house.”

Coleman overlooked the fact that it wasn’t just Golden and the police he’d told his story to, as well as the fact that those who were there that night had seen it all. Wheeler had testified that she had been sharing posts on Facebook looking for Polk and Jones, and after about a month, Coleman called them to her attention.

“He said the people that I’d been sharing their fliers on Facebook,  that he did them,” she said.

It was his idea, Coleman testified, to dismember the corpses and hide the bodies and body parts, in part to protect Golden, and in part because “my DNA was on April because we’d been wrestling around.” He and Tubbs went to Walmart and bought tarps, gloves, shovels, boots, and even masks just in case there were deer cameras in the woods before they eventually went back to where Coleman said he had dragged both bodies.

Testimony from police held that Tubbs wouldn’t help dismember Polk because they had been friends, but that she “enjoyed” dismembering Jones.

As Coleman was questioned, he bragged of having multiple cars, multiple properties, multiple guns, and that he was sleeping with an alleged 47 women.

“Money makes you handsome even if you’re ugly,” he said. “They wanted dope, I wanted (to have sex).”

He seemed unaware of, or indifferent to, the looks on several jurors’ faces as well as most of the rest of the courtroom. His self-promotion was not playing well.

On cross-examination, Coleman’s tone was slightly different than that he took with his attorney, Mike Carr. Multiple times he answered prosecutor Leslie Flint’s questions as though they were irrelevant. The two even raised their voices at each other in the interchange.

Testimony had borne out that Coleman had put a bag in Wheeler’s car. She testified that she didn’t realize at the time that it was a decapitated head and hands, but she had called him the next morning to come get it out because she thought it might be drugs. When he came for it, she picked it up by the top but caught another part of the bag with her other hand. She said she felt what she thought was an ear or a nose.

She said she asked him what he had done, and then she put it in his car.

When Coleman testified he had given the head and hands to Wheeler, he said he had told her to get rid of it, and that he knew if he told her to, she would do it without asking any questions. As a part of his story, he then told the court that Wheeler still had it in her trunk five or six days later when he met up with her for something else.

Coleman wasn’t prepared for Flint. As they exchanged heated testimony over Wheeler’s involvement in disposing of Polk’s head and hands, which ended up on the outskirts of Coleman’s property, Flint asked, “Was the bag leaking when you gave it to her?”

“Was the bag leaking when she put it back in your car?” Flint asked.

The questioning went on from there, as if there hadn’t essentially been a hole blown in Coleman’s lie.

Another fatal blow to Coleman’s narrative unfolded in the storyline of an anonymous tip that had been called in to let police know where the head and hands were buried. Golden had testified that Coleman had told his father, Keith Coleman Sr., where he had buried them on the edge of their property in some tall grass and growth.

Later testimony from Deputy Tommy Bryant revealed that Coleman Sr. was the one who had called police with the location.

Flint , who referred to Coleman as a narcissist more than once in her closing, echoed a sentiment that had been voiced from the witness stand by Clinton: Coleman, they said, was not going to let anyone else take credit for his work. When two other suspects came forward with a false confession, it had resulted in Coleman asking to talk to Clinton and telling his story, saying he didn’t know why they would have said that because they weren’t even involved.

“If he loved her so much and was so concerned about his baby’s mama, why now? She’s still his child’s mother,” Flint said. “Because he thought she’d never have the strength to testify against him.”

For the defense, Carr sought to establish reasonable doubt by referring to what scientists call a “defect” in Polk’s skull that Mississippi Forensics Laboratory Forensic Anthropologist Anastasia Holobinko said could not be ruled out as a gunshot wound. There were metal fragments — by policy automatically labeled as “bullet fragments” — found inside and with the skull, and Carr pointed out how those could tell the story that matched Coleman’s.

But any thought of the weight of that was conceivably erased when prosecutor Jamie Banks pointed out Coleman’s slip-up about the bag in the front seat. Coleman had said multiple times that he had lied during his initial statement in which he’d confessed to the killings, telling the court, “I said a lot of stuff back then,” but he held that he was telling the truth in the courtroom.

Banks recounted the conversation about the bag to the jury in case they had missed it.

“The Devil is in the details,” she said.

Tubbs, who to some had seemed much like an afterthought throughout the case, did not testify. As she was led from the courthouse in handcuffs, she winked at the cameras.

Clinton gathered Polk and Jones’ families outside the courtroom in a conversation not meant for cameras just after the verdicts were read and made them a promise that the rest of their loved ones’ remains would be brought home so they could have proper closure. Faces that had carried nothing but stress and sorrow since 2019 showed relief, almost as though they could breathe again after a long time under water.

Both Tubbs and Coleman are now in the custody of the Mississippi Department of Corrections. They will each serve two consecutive life sentences with two sentences of three years each concurrent in the murder and desecration of the corpses of April Jones and Will Polk. No more drugs, guns, women, cars, houses, babies’ mamas. No more Lil’ Dusty.

Dezimond “Cutthroat” Green is charged separately in the case. Currently details on a trial date are unknown.