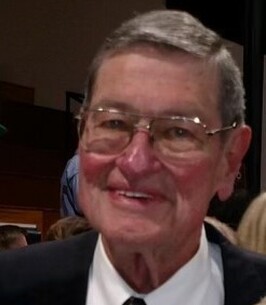 Randell Glen Sullivan, 87, died Monday, June 27, 2022. He was born on April 11, 1935, in Weir, to W.O. And Hazel Sullivan. During his college he worked as a pharmacist for Burnley’s Drug Store in Batesville, MS and upon graduation from pharmacy school in 1957, he purchased Burnley’s Drug Store from Mrs. Burnley, and became the owner of Sullivan’s Drug Store.

During his lifetime, Randell engaged in other pursuits in addition to pharmacy. He was an avid outdoorsman and hunter and often traveled throughout the United States to hunt duck, quail, deer, elk, pheasant, and bear in places like Colorado, Oregon, New Mexico, Wyoming, and Illinois. He also enjoyed fishing and once put his pontoon boat in the Mississippi River at Memphis and fished his way down to Natchez, with his friends.

He especially enjoyed raising cattle and showing them at the Dixie National in Jackson where they placed in the championship classes on more than one occasion. He was the first cattleman to have Santa Gertrudis cattle in Panola County.

He also took great pride in growing the hay necessary to feed his cattle and was recognized by Mississippi State University for having one of the highest protein value hybrid Bermuda hays in their program, at that time. He also excelled as a real estate developer and developed and sold properties throughout much of northern Mississippi. Later in life, he became interested in trees and timber, and established himself as a tree farmer by planting and managing over 1,000 acres of trees.

His favorite times were spent with his family and friends. He loved having cookouts with them at his hunting camp or at the lake and his Christmas Eve parties in the neighborhood, where his children grew up, were open to all.

He is survived by his wife of 67 years, Nan B. Sullivan, one son, Stephen Sullivan and his wife Sherry; two daughters, Sherry Sullivan and Susan Sullivan; two grandsons, Adam and Sam Sullivan; and one granddaughter Kelsey Sullivan. He was preceded in death by his parents and one son, Randell “Randy” G. Sullivan, Jr.

Funeral services will be held Thursday, June 30, at 11 a.m., at Curtis Union Baptist Church, 3489 Curtis Rd., Batesville. Visitation will be at the church from 9:30 a.m. – 11 a.m. John Howell, Jr. will officiate the service. Burial will follow at Batesville Magnolia Cemetery.