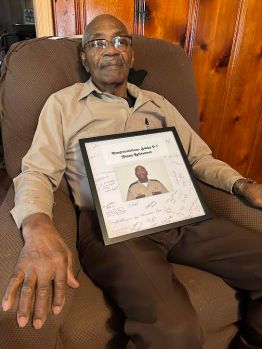 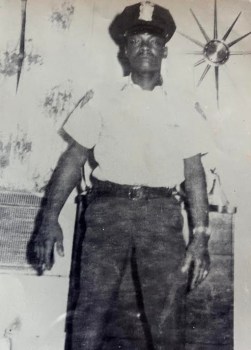 Bobby Walton, Sr., says he didn’t think much about his part of Batesville history when he was sworn in as the city’s first black policeman more than 50 years ago, just that the Police Department needed help and he was willing.

It was 1968 when officer Aubrey Howell offered him a spot on small force. “Horsefly came down to where I was working on cars and asked me and that’s all there was to it. We didn’t have any training at the time and there wasn’t a whole lot of pressure because Horsefly didn’t know much more than I did at the time,” Walton remembered, calling the late chief by his popular nickname.

Walton, who lives quietly on Patton Lane, now spends his days watching television, fishing, and reminiscing about his days in law enforcement and in the automobile repair business for many years in Batesville.

As southern law enforcement agencies began to integrate in the late 1960s, some minority officers were hired to patrol only the neighborhoods they lived in, and were often prohibited from making arrests of white people.

Not so in Batesville, Walton said, remembering that he was given no boundaries and never made to feel unsafe or unwelcome as an officer. “We had about the same kinds of problems back then with people breaking in and robbing, maybe not quite as bad as it is now,” he said. “Once they broke into Batesville Warehouse and we finally arrested them way over in Clarksdale. I remember that was a big deal when that happened.”

“They were enrolling James Meredith at Ole Miss and Dr. King got killed and I had to do some transporting for them, so it was a lot of things going on about that time,” he said.

Walton was born in Panola County in 1942. His father was a longtime mortician at Moore’s Funeral Home and his mother worked for Dr. House and Dr. Carlson at the hospital. Not wanting to get into the funeral business, Walton developed a knack for car repair as a teen and was a skilled mechanic for many years.

His BPD career lasted about a year before he dropped that part-time work to focus on the more lucrative car repair business. He worked with the Sheriff’s Dept. off and on, first for Sheriff Forest Tuttle during this 30 plus years of car repair.

In 1982, Sheriff David Bryan asked him to join the Sheriff’s Office full-time, a post he held until his retirement in 2017. His second law enforcement stint evolved into a transportation position, and were among the best years of his life, Walton said.

“Now I really enjoyed that, transporting prisoners all over the place. They would commit a crime here and run off somewhere and sooner or later they would get arrested there and the sheriff would send me to get them,” Walton said. “I liked to stay gone. Pontiac, Michigan was as far as I ever went but it was also somewhere to go.”

Walton said he still encounters people who recognize him and talk about times he was their transport driver. “I was in an office one day and this nice looking lady sat down beside me and started talking like we saw each other yesterday. I didn’t know who she was but then she said I had taken her down to Rankin County three times and she still remembered me,” he said.

Being an officer in a small town meant Walton often had to deal with family and friends professionally, but said people always understood he was only doing a job.

“My daddy was cutting up one time and I finally got him stopped down by the daycare,” Walton said. “I didn’t take him to jail but I gave him a good warning. I still get tickled about that, but that’s just how things were.”

These days Walton said he is content to attend church on Sundays – he’s been a member at Bethlehem for 62 years – and still does his own cooking. He keeps a spotless house and his yard stays well kept. “It gives me something to do, and then if I want to go I just get in my truck or car and go.”

He is close with his three children and said he doesn’t mind living alone. “I had two wives pass and two that I passed on,” he said, grinning slyly at his own joke.

Walton is proud of son Bobby Walton, Jr., he said, who serves as a city alderman, but doesn’t get involved in politics. “That’s not for me, I stay to myself and keep to my own business,” he said.

Walton is also proud that he was the first black mechanic in Batesville to earn ASC certification for refrigerant recovery and recycling in automobile air conditioning systems. He said buying the expensive equipment took hard work, and night classes at Coahoma Community College to earn the certification required persistence.

“I was glad to get that and it was a good business for me,” he said.

Asked about the changes in Batesville in his lifetime, Walton said he is most impressed by the growth of the city and the integration of minorities into all parts of government and business. “You can go to any restaurant, office, wherever and there are black people working and that was just unheard of years ago. It’s made Batesville better and I like living here. I’m not going anywhere,” he said.