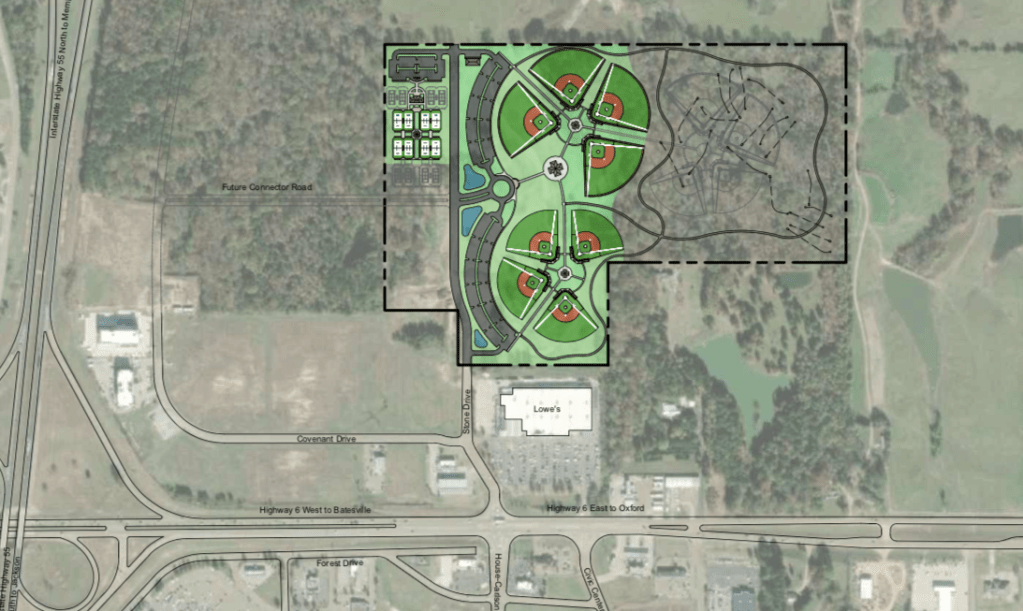 Prepared by Sloan Landscape Architectural of Oxford, the drawings gave aldermen an idea about how such a project would look at one of the sites being considered for a sports complex large enough to attract traveling baseball and softball teams for major tournaments as well as provide a modern tennis facility that would also hold invitational events.

Azar said the architectural firm used the property behind Lowe’s on Hwy. 6E for their drawings after they visited the site with city officials about a month ago. That piece of property, Azar told the board, has been offered to the city at what he described as “a very reasonable price” although he reserved further details for executive session.

Another possible location discussed by aldermen in the past month would be near the north Batesville exit or somewhere around the I-55 and Hwy. 35N area.

Azar said the location can be determined later, but wanted to give aldermen drawings to begin the process. Also not discussed in length is how the city intends to pay for the ambitious project, which will likely come with a $18-20 million price tag.

In the drawings presented last week, the property behind Lowe’s would have four small ball fields, four large fields, and eight tennis courts built in a separate area adjacent to the fields. Both the ball fields and the tennis courts would have designated parking areas and restroom and concession facilities. There are also plans for a disc golf course and walking trails at the site.

More room for additional fields is also available on the drawings.

At Trussell Park, which currently has three ball fields and six tennis courts, the architects proposed to create a soccer complex with fields of varying size, including two large ones that could be used for flag football leagues.

Trussell Park’s existing infrastructure, including lights, restroom, and concession areas would be utilized in the new design should the park be converted to a soccer complex. An addition to the current walking trail would also be considered.

“I know this is very early, but I wanted to give the board something to see and think about,” Azar said.

In other Partnership business,