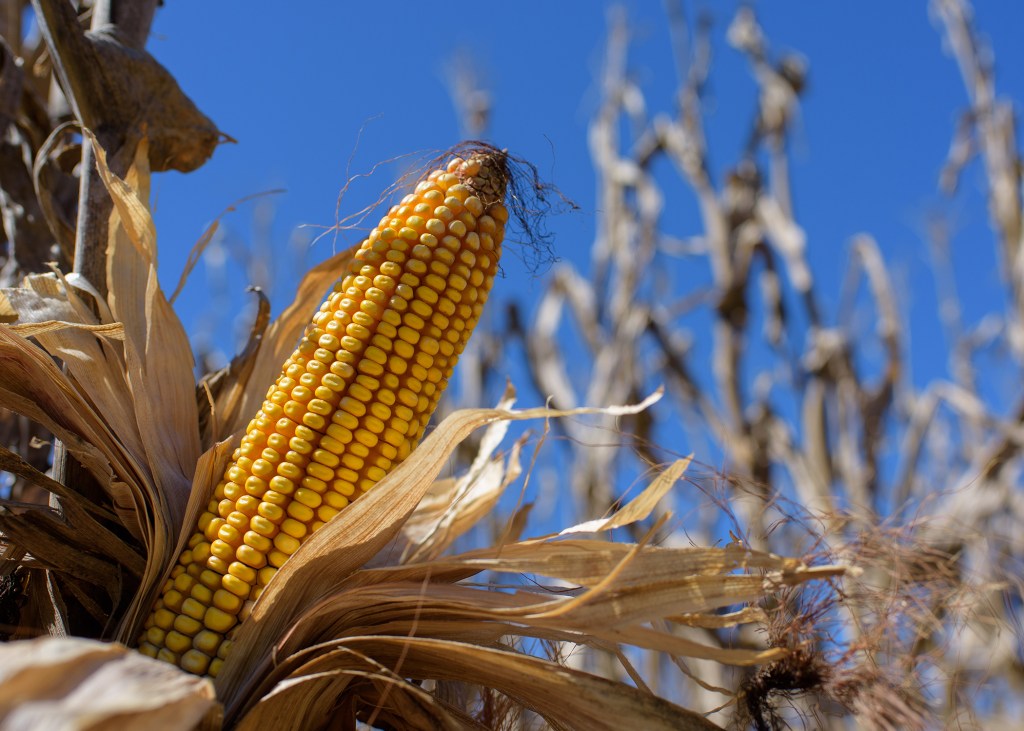 CORN -- Mississippi’s corn harvest should be complete by the end of September, and growers are expected strong yields on the 640,000 acres planted in the state. (Photo by MSU Extension Service/Kevin Hudson) Alt text -- The husk has been pulled away from a yellow ear of dried corn in a field. ###

STARKVILLE – Mississippi’s corn crop faced challenges ranging from a midseason flood to an early-September hurricane, but yields and quality look positive on the nearly complete harvest.

On Sept. 13, the U.S. Department of Agriculture estimated the crop was 75% harvested. Its most recent evaluation indicated 84% was in either good or excellent condition. Mississippi had about 640,000 acres of corn in 2021.

Erick Larson, grain crops specialist with the Mississippi State University Extension Service, said the state’s high corn acreage — while not reaching the high of 850,000 acres set in 2007 — was boosted by strong prices and favorable planting conditions.

“We had less rainfall than normal during March and April, which promoted corn planting and allowed growers to plant their full intentions, or even exceed those,” Larson said. “That is a rare occurrence, as rainfall normally prevents farmers from planting as much corn acreage as intended.”

Benefitting from timely planting and a dry May, the crop developed in outstanding condition early in the season, Larson said. The second week of June brought drenching rainfall, especially across north Mississippi where 10-15 inches produced extensive flooding.

While some areas drained within a few days, river systems in the Delta experienced severe backwater flooding, which killed crops inundated for more than five or six days. In some cases, fields remained flooded for several weeks.

“The impact was catastrophic because all the crops were planted and the inputs had been added, so the dollar value of the losses per acre were extremely high,” Larson said.

According to the MSU Extension report “2021 Mississippi Agricultural Crop Damage Assessment,” Bolivar and Sunflower counties had the most corn acreage lost to flooding. The value of actual damages varied according to whether the crop was damaged but survived or was destroyed and had to be replanted to soybeans.

The north Delta counties of Bolivar, Coahoma, Sunflower and Tallahatchie each sustained estimated corn losses of $10 million to almost $29 million.

Corn should post good yields, although not as high as they could have been. June rainfall was two to four times above normal, and this will limit corn productivity, Larson said.

Although there were some leaf diseases present, including Curvularia leaf spot, Southern rust and Southern corn leaf blight, none developed into a crisis situation.

“There was more interest than normal in managing those diseases because commodity prices were so good and the yield potential was high,” Larson said.

Corn harvest should be complete in the Delta by mid-September, and the end of the month for corn planted elsewhere. Rainfall, cool weather and humidity have slowed the dry-down process and harvest progress to date.

Corn will net good prices when it makes it to market. Will Maples, Extension agricultural economist, said there has been great improvement in the corn market since 2020.

“The December futures contract peaked above $6 in early May and again in early June, and December futures have consistently traded above $5 since early April,” Maples said. “The largest driver in corn prices has been strong export demand.”

USDA recorded national average farm price for corn of $3.56 a bushel in 2019 and $4.40 a bushel in 2020. The current projected national average farm price is $5.75. Strong exports are helping keep the price high. USDA estimates a 56% increase in U.S. corn exports in the last marketing year, much of which can be traced to large purchases from China.

“The current expectation is for corn exports to remain strong for the 2021 marketing year,” Maples said. “Ethanol remains a key demand source for U.S. corn, with current projections at 5,200 million bushels for 2021, an increase of 125 million bushels from last year.”

Find current information about the Mississippi corn crop and the state’s other major row crops at https://www.mississippi-crops.com.