Specialty peppers are fun in gardens and on tables 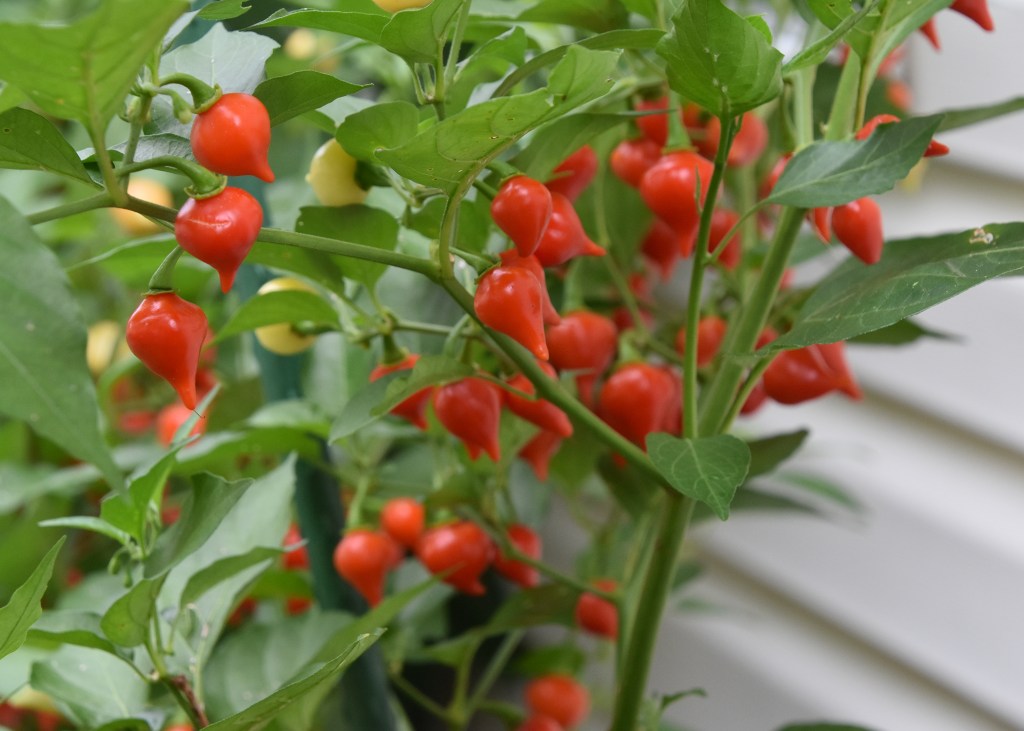 As I wrote this column, I also was watching the weather as Hurricane Ida aimed for the northern Gulf of Mexico. As such, I spent time in the garden picking and harvesting various crops that I don’t want to lose.

One group of plants I harvested were my specialty peppers that I’ve been babying all through this hot and humid summer. I brought in both biquinho and aji charapita peppers.

I’ve been intrigued with the interesting biquinho peppers. I first became acquainted with these peppers on a salad bar where they were a pickled option called Sweety Drops.

Biquinho peppers about an inch long and have a unique shape, with a round head and a pointed end. If you use your imagination, you can see how this looks like a bird’s beak, hence their common name of little beak peppers. I love that there are red and yellow selections.

Biquinho peppers are a member of the Capsicum chinense family of peppers, which are known to have a fruity flavor. These peppers have a little bit of heat — up to about 1,000 Scoville units, which is a measure of pepper heat. Compare this to their cousin the habanero pepper that has up to 350,000 Scoville units.

The other specialty pepper I’ve become obsessed with is the aji charapita.

These are small peppers from the Peruvian jungles of South America. For the longest time, this pepper was unknown to the rest of the gardening and culinary world. The mature fruit of the aji charapita is about the size of a pea and bright yellow.

Eaten raw, these peppers first have a citrusy flavor, but then comes the heat. I’ve described them as being little molten balls of pain. In Peru, they’re called “pelotitas amarillas de fuego” or “little yellow fire balls”! They have a heat rating of up to 100,000 Scoville units.

These peppers are great frozen whole, and it is easy to just toss a few into a stir fry or salad.

This year, I’m going to make my own pickled biquinho and aji charapita peppers using a recipe I got from a gardening friend.

Ron Wilson, host of “In the Garden with Ron Wilson” on Saturday mornings in Cincinnati, has shared his mom’s secret pickled pepper recipe. Well, it’s not really a secret since he shares it every year for his radio listeners.

So here goes Nell’s secret recipe. First make a brine using 6 cups of 5% white vinegar, 2 cups of water and 1/4 to 2 cups sugar (this helps to “cool” the pepper heat). Always follow proper canning procedures when doing this at home.

Seeds for both of these peppers are available from many online seed sources. If you’re interested in growing them next year, go ahead and start ordering seeds now so you don’t get left out next gardening year.

EDITOR’S NOTE: Dr. Gary Bachman is an Extension and research professor of horticulture at the Mississippi State University Coastal Research and Extension Center in Biloxi. He is also the host of the popular Southern Gardening television and radio programs. Contact him at southerngardening@msstate.edu. Locate Southern Gardening products online at http://extension.msstate.edu/shows/southern-gardening.