Turkey gobbling activity is related to the weather 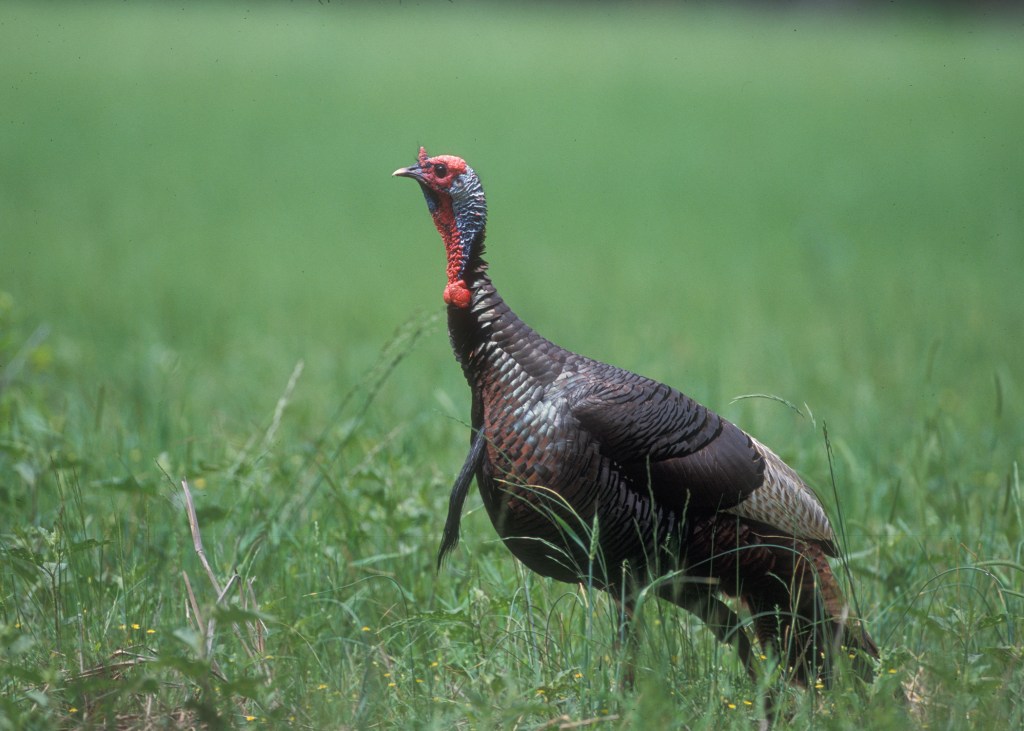 Mississippi State University personnel are involved in research and educational efforts to ensure that turkey hunting is well-managed and successful in the state. (Submitted photo) Alt text -- An adult male turkey is in the woods. ###

It seems that wild turkeys don’t like humidity any more than people do.

That is a finding of a study conducted by the MSU Forest and Wildlife Research Center, or FWRC, in response to concerns that Mississippi’s turkey season was not timed properly.

MSU supports turkeys and turkey hunting in a variety of ways, including through publications and land management workshops offered by the Extension Service.

Setting hunting seasons is the responsibility of the Mississippi Department of Wildlife, Fisheries, and Parks, or MDWFP. This agency has traditionally instituted a statewide, 7-week, spring harvest season for turkeys. Hunters routinely argue that there are different peaks in gobbling activity across the state, meaning the season should open and close at different times in different parts of Mississippi.

Francisco Vilella, an FWRC adjunct professor and scientist with the U.S. Geological Survey Cooperative Fish and Wildlife Research Unit, said turkey hunters in the southern part of the state thought the season began after peak gobbling activity ended. Hunters in north Mississippi thought the season began too early before turkeys began their ritual vocalizations and courtships. Gobbling is an activity of toms — adult male turkeys.

“The objective of this study was to determine whether differences in peak gobbling activity existed across a latitudinal gradient of Mississippi,” Vilella said.

This study, Latitude and Daily Weather Effects on Gobbling Activity of Wild Turkeys in Mississippi, was published online in the August 2019 edition of the International Journal of Biometeorology.

The data suggested that weather influences gobbling activity, and the existing hunting season covers peak times of turkey activity across the state.

“Across the globe, natural-resource managers strive to understand the effects of weather on wildlife populations to implement effective conservation and game species management,” Vilella said. “Weather has been recognized as a density-independent factor influencing the abundance, distribution, and behavior of vertebrates.”

Vilella said the MSU data indicated that no changes were required to the hunting season framework established by MDWFP. While turkeys have different peaks at the geographic ends of the state, both peaks are captured by the hunting season.

In 2021, the fall general turkey hunting season extends from Oct. 15 to Nov. 15 in certain counties. The spring general season was March 15 to May 1.

Matthew Palumbo of Lackawanna, New York, took on this study for his graduate research project. Palumbo earned a master’s degree in wildlife and fisheries science in 2010 from MSU.

“Data were collected from a statewide gobbling survey in 2008 and 2009 that monitored gobbling activity a month prior to the hunting season, throughout the season, and a month after the season,” he said.

The researchers applied mathematical models to describe the probability and frequency of gobbling activity within northern and southern regions of the state.

“Our results revealed an approximate 10- to 14-day difference in peak gobbling activity between southern and northern Mississippi, but those peaks occurred during hunting season,” Palumbo said.

This study also presented information to MDWFP on how the spring harvest season relates to regional breeding behavior in the form of frequency and intensity of gobbling activity.

Much of the data found in this study is captured in MSU Extension publication 3406, “Wild Turkey Ecology and Management for Mississippi and the Southeastern U.S.” This publication is a tool that can help both hunters and land managers in their quest for turkey.

Words mean things, and the ‘treason’ talk is tiresome

Tips To Consider When Planning Your Retirement Part 1