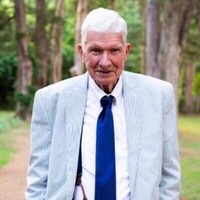 Billie E. Shepard, age 92, went to meet his Lord and Savior on May 25, 2021.
Billie was born on a small farm outside of Como, on July 17, 1928.
After a courageous battle with cancer, Billie passed away peacefully while surrounded by his loved ones.
Memorial services for Billie will be held on Friday, May 28, at 10 a.m. at First Baptist Church of Sardis. Hal Johnson will preside over the service.
He is survived by his beautiful wife, Kyzee Shepard who was his steadfast supporter and remained by his side throughout his illness.  He was a proud father to Patricia Tramel of Batesville, Billie E. Shepard Jr. of Gulfport, Robert S. Shepard (Melissa) of Batesville, and Beth Shepard Garner (Lee) of Batesville.
He was grandfather to 16 grandchildren and great-grandfather to 14 great grandchildren. He had countless other family members and friends who will cherish his memory.
He was preceded in death by his mother, Gertrude Bonner Shepard; father, Jesse Earnest Shepard and Brother Earnest Shepard Jr.
Billie had an entrepreneurial spirit and enjoyed several careers over his lifetime. He began farming early in his life. He received a commercial driver’s license at 14 years old and began driving large trucks for his father’s freight company.
A true salesman, Billie spent years in auto sales. In the 1980s he received a federal grant to establish Sunbelt Energy Cooperation, where he became one of the first to research alcohol use in gasoline.
Some of Billie’s most cherished years were spent working alongside lifelong friend, Bob Dunlap. With his many interests, careers, and travel – he lived several lifetimes in the span of his own. Billie was born with an inquisitive mind and a true thirst for knowledge. Despite his 8th grade education, he was extremely well read and spent his days researching his many interests including politics, current affairs, automobiles, and medical technology.
Traveling was one of Billie’s true passions. Mexico, Egypt, and the Holy Land were among his favorite places, with countless visits to each. Billie enjoyed spending time in his garden and had a true green thumb. He shared this love with his family members who are able to enjoy trees and plants that he planted for them in their yards.
Billie was a long-time member of First Baptist Church in Sardis. He was a 32nd Degree Mason.
Memorial contributions in memory of Billie may be made to M.D. Anderson Cancer Center.
MD Anderson Cancer Center
P.O. Box 4486
Houston, TX 77210-4486
www.mdanderson.org/gifts
You Might Like