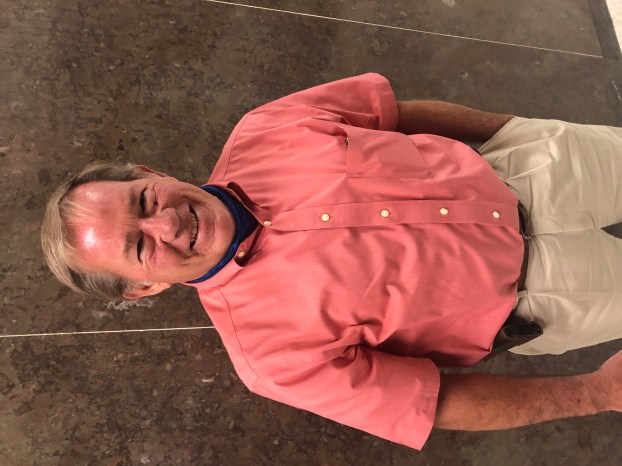 In December, James Butler took on the job of Sardis Public Works Director, a position previously occupied by Quinn West. Since then he’s been enthusiastic about the job, and continues to educate himself in order to be prepared for challenges to come.

Ongoing projects at Sardis Lake, and dealing with the property around the City limits are matters that have been designated to receive priority attention.

Also, long overdue upgrades, infrastructure issues, and work needing to be done at the lagoon – the water treatment plant where the wastewater is held.

Butler said his goal is to get these things handled, and to “improve the quality of life here in Sardis.”

Formerly the public works director in Clarksdale for over a decade, he considers much of what he dealt with there to be relatable to Sardis – such as waste management, and building inspections – but also different because water and sewer services were the responsibility of Clarksdale Public Utilities.

Butler has friends that are operators at public utilities throughout the region, and they all expressed the same opinion – that before taking the certification exam, it’s better to surround yourself with it and become familiar with the terminology and with the water.

Mississippi Rural Water Association offers online webinars to help prepare for the exam, and Butler said he plans to get both certifications – as a water and sewer operator – and that the webinars have been helpful.

“It’ll be a lot easier than just trying to go study for the exam, then take it,” he said, with regard to his plans to gain more hands-on experience – “which makes a lot of sense.”

“Every week goes by I realize – they were right,” said Butler, of his friends’ advice.  “I’m not trying to get in too big a hurry with that.”

As far as the other challenges in store for Butler, he addressed the difficulty of securing the means necessary to repair the “old” infrastructure in Sardis, including streets, sewers, and ditches.

“You know with the tax base of Sardis – a town this size,” he said, “the biggest challenge is just trying to find the funds, and have the resources to get it handled.”

Butler is originally from Oxford, although he and his wife have lived in Clarksdale for 37 years, where they’ve run the event space and tourist attraction, Hopson’s Commissary, for most of  those years.

He began renting a place in Sardis, but frequently returns to Coahoma County.

Butler and his wife are currently in talks with potential buyers for their event space.  It had been their retirement plan, but now has an uncertain future, thanks to the pandemic’s impact on local tourism.

Butler said that a friend from Sardis called him – knowing he’d been the public works director in Clarksdale, and that Hopson’s had been indefinitely shut down – and encouraged him to continue his civic work, and consider filling the vacancy in Sardis.

In their first conversation about the possibility of taking the job, Butler recalled that he said to his friend, “well I’m retired, but I’m bored,” and then chuckled.

“I didn’t have to think long,” Butler said.

“I’ve enjoyed it so much, so far.  The mayor and board have all been really good to me,” said Butler.  “The public has been receptive to me, and I think it’s gonna be a lot of fun – even though it’s gonna be a challenge.”

Butler’s grown children and grandchildren all live in Oxford, and have no plans to move back to the Delta, which makes his new location in Sardis also a convenient halfway point.

“This is a good spot in between,” he said.

Pope School has named the students who have earned the top three graduating positions for the school’s upcoming commencement ceremonies.... read more