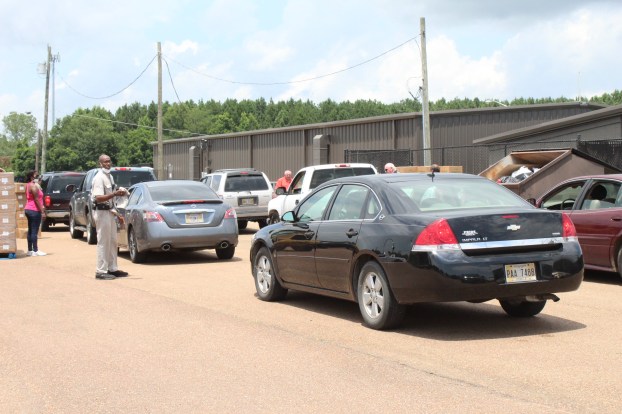 Panola County residents lined up early last Thursday to receive boxes of fruits and vegetables and milk. There is no paperwork or qualifications, and all county residents are encouraged to take part. (Glennie Pou)

After excellent results last week, another No-Contact Food Distribution event is set to take place again this Thursday, July 16, at locations in both North and South Panola County.

Volunteers from the fire and police departments, and the Panola County Emergency Management Agency, came out to high school parking lots at NPHS in Sardis, and SPHS in Batesville, to assist with the giveaway – which was orchestrated in conjunction with the illustrious Mid-South Food Bank.

“Mr. Bill Blackwelder (Delta Southern UAS), he contacted me a couple of weeks ago, and wanted to know would I be interested in being part of this food giveaway,” said Panola County Sheriff Shane Phelps.  “Sheriff K.C. Hamp in Tunica – he started this, and it has grown tremendously.”

Sheriff Phelps explained that other nearby counties had been participating – prior to Panola’s involvement – including Coahoma, DeSoto, and Sunflower, and that Mr. Bill has recently recruited neighboring Tate County to join in distributing.

“So he’s trying to reach out to every county around here to get this out to the people who need food,” said Sheriff Phelps of Blackwelder,  who sparked the local distribution of what has grown to upwards of around a thousand boxes.  “I’ll tell you, it is a good thing for them to do this for the people of the county.”

Although the giveaway this Thursday expects to be very similar to last, Sheriff Phelps informed that for the following week the county will have access to a refrigerated truck, which will transport varieties of milk – including 2 percent and strawberry – and some other items.

Phelps added that the refrigerated truck will be meeting another “reefer truck” in Sardis, and will be unloading half of its load to carry to Batesville, so that the liquids will be available at both locations.

There are expected to be plenty of boxes to go around, full of nutritious fare, such as potatoes, onion, apples, and carrots, which will be loaded into vehicles by volunteers on a first-come, first-served basis.

The event, which has also been shown support by State Rep. Lataisha Jackson, will begin at 1  p.m. – rain or shine.

Further information regarding upcoming distributions will be posted on the Panola County Sheriff’s Office Facebook page.