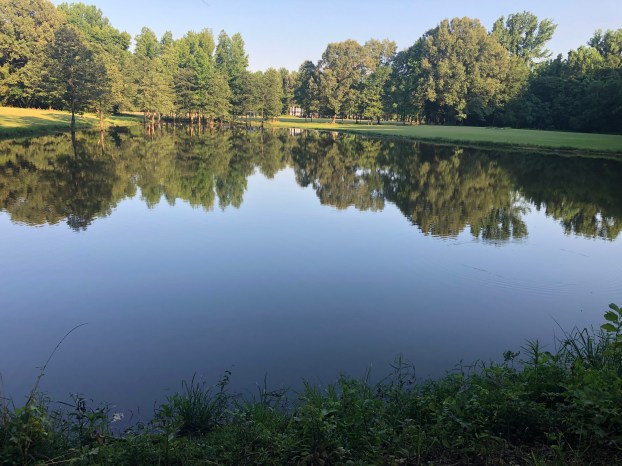 Batesville board says no fishing at the Mounds park

A new policy adopted by the Batesville Mayor and Board of Aldermen prohibits fishing in the only pond located in a city park.

Batesville Mounds is a popular park with walking tracks, nature trails, a few acres of open grass and a pool of water less than an acre in size. The Mounds was largely built with state and federal grants, and the preserved Native American burial mounds are an attraction that draws many visitors from the traffic passing Batesville on I-55.

At almost all times of the day, especially early mornings and evenings, people can be see walking the tracks and trails, some with pets, while children play in the grass and around the trails. Until this week the Mounds had also become a popular place for citizens to fish, but the city board halted that recreational activity on Tuesday with a 3-2 vote.

Alderman Stan Harrison made a motion to ban fishing and swimming at the pond and it drew a second from Dennis Land. Aldermen Teddy Morrow and Bobby Walton did not like the policy suggestion, both saying that public parks should be enjoyed by families, including fishing.

Morrow said he would rather see the board consider some strict guidelines for fishers, rather than making a policy that allows no fishing. Walton agreed, reminding the board a church group asked permission to take kids for an afternoon of fishing there just last year and the children, some who had never had the opportunity to put a baited hook into water, had great fun.

Harrison said if the pond were elsewhere in the city he would make other considerations, but the intent of the the original park project was to preserve the sacredness intended by the Native Americans who built the burial mounds.

With Alderman Bill Duggar not in attendance the 2-2 tie between the board members meant the decision fell to Mayor Jerry Autrey, who only gets to cast a vote in case of a tie, a rare occurrence. He gleefully voted yea to prohibit all fishing and swimming, by city policy.

The matter came before the board when Public Works director David Karr asked the board to set a standard regarding fishing at the pond. Karr said he had no real preference whether to allow fishing or not, but wanted some direction for the Parks and Recreation Dept. in the upkeep of the park.

Karr said city workers were finding trash on the banks and had seen people catching and keeping fish. Karr noted that if the city wanted to keep a nice place for citizens and their families to fish the pond must be managed and catch-and-release guidelines would need to be enforced.

The Mounds is currently being considered for major improvements including sitting areas and restroom facilities. Aldermen want to make the area as attractive as possible, but are also serious about guarding the historical integrity of the burial grounds. No gatherings are permitted and there are no picnic tables or arbors for crowds.

Batesville allows the Boy Scouts to use the Mounds for a yearly jamboree-type weekend gathering when hundreds of scouts and their family members pitch tents and camp. There are traditional games, outdoor cooking, and ceremonies, highlighted by the older Scouts performing Native American dances in full regalia.

The board initially considered making a motion to establish an ordinance prohibiting the use of the pond, but chose the less powerful policy when attorney Colmon Mitchell reminded aldermen that an ordinance would by definition carry a fine, and/or jail time, if broken.

Harrison suggested a $50 fine for illegal fishermen, and City Clerk Susan Berryhill pointed out that many ordinances carry a $500 fine, some even steeper.

The final motion was for the policy, though, and board members said if the problem of peaceful citizens fishing in the city park continues they will consider a harsher city government mandate.

Aldermen may revisit the matter in a future meeting, and seemed open to the suggestion that citizens be allowed to obtain a permit, perhaps with a deposit, to fish in the pond if they agree to catch-and-release guidelines and will not leave trash.

With a permit process in place, the Code Office would have a record of who was supposed to be fishing in the area and could follow up with the individuals if trash was left, or other damage caused during their visit.

Sardis town aldermen have voted to not pay invoices of nearly $30,000 for this playground equipment installed at the town’s... read more