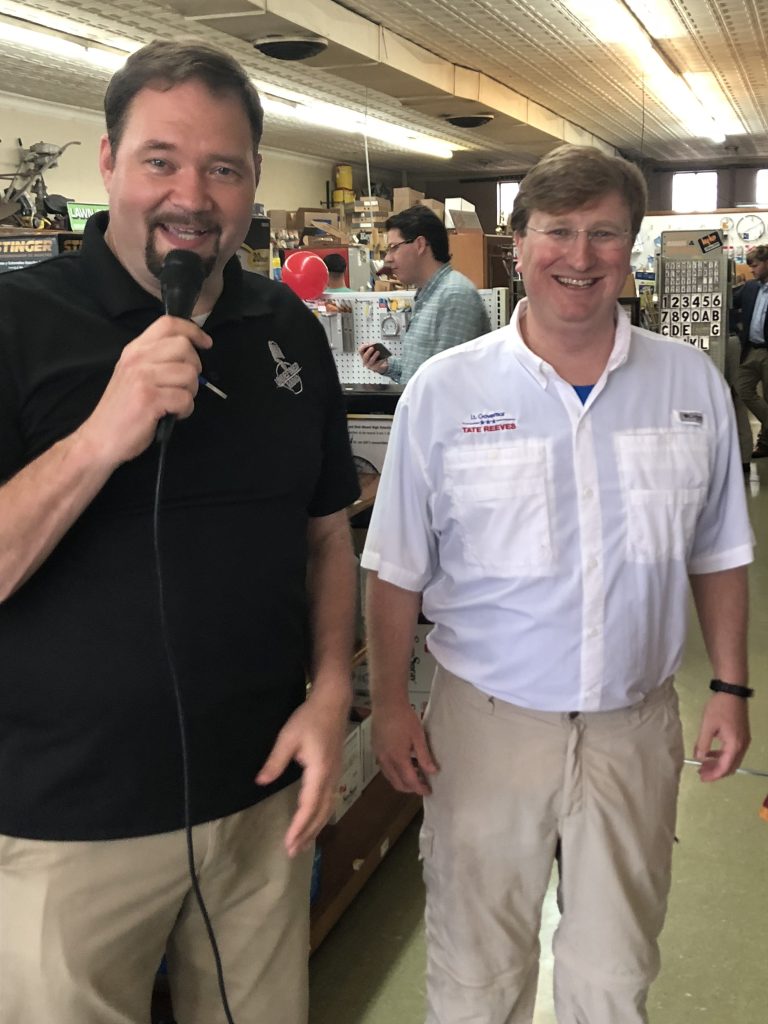 Mississippi Governor Tate Reeves  was Lieutenant Governor when this photo was taken May 4, 2019, at the 103rd  anniversary celebration of Batesville’s oldest business, Flint’s Hardware. He was being interviewed by Johnny Pace for the Mississippi Morning Show. Now Governor for three months, Reeves is guiding the state through the coronavirus pandemic.  He will make a major announcement at 3:30 p.m.

Mississippi Governor Tate Reeves plans to make a “major announcement” regarding the state’s response to the coronavirus outbreak.  The announcement will be made during a Facebook Live at 3:30 p.m. from Jackson.

The governor didn’t go into any details, but said “it will require all of us to adapt in order to save lives.”

Some media outlets are reporting  that Reeves will issue a statewide stay-at-home order as early as Wednesday afternoon. They said the decision was based on data which reportedly shows Mississippi’s cases peaking in late April or early May.

In Batesville, the Mayor and Board of Aldermen convened by telephone again at 2:35 p.m. to continue discussions started this morning about concerns they have with several local factories. They went into executive session 10 minutes later.

They were expected to hear an update from Panola Partnership CEO Joe Azar about four industries that have announced temporary closings and the safety/sanitation plans at other local plant sites.

This morning the board heard details about problems with at least one factory in reaching full compliance with the measures the Batesville city board wants implemented to protect the city’s population from the spread of the deadly coronavirus.