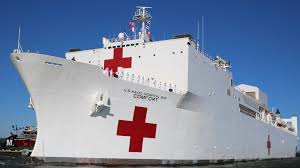 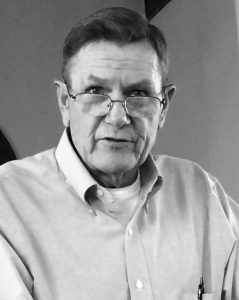 The threat of our hospitals being overwhelmed by the spread of COVID-19 has brought the navy’s two hospital ships, USNS Mercy and Comfort, back into the news. Though fitted out in 1986 to provide mobile medical support for U.S. military forces, they have been more often used for disaster relief and mercy missions in this country and abroad.

To assist in the current crisis, the Mercy was ordered to Los Angeles and the Comfort to New York where the virus is rampant.  The ships will treat patients with other illnesses or injuries and allow the local hospitals to focus on virus cases.

My personal interest in the Comfort goes back to 2007 when I was the ship superintendent at Boston Ship Repair while still living here on the farm. This strange arrangement was possible because the shipyard was busy only about half the time, and my earlier seagoing career had left me accustomed to long periods away from home.

The Comfort came into our facility for a dry-docking and repair period that lasted almost three months.  There was a long list of repairs, modifications, system upgrades, and routine regulatory inspections to be accomplished, and I got to know the old girl from stem to stern.

She is a strange mixture of the old and the new.  Her imposing superstructure projects the image of a modern ship, but she is in fact a conversion rebuilt from the hull and propulsion plant of a 1970’s steam-powered oil tanker.

Forward of the original engine room there is a diesel-powered electrical generation plant and all the power distribution systems required by a state of the art, 1,000-bed hospital with twelve operating rooms and a host of diagnostic and treatment facilities.

I recall quipping at the time that it was like examining a modern luxury car with all the latest electronic gizmos and finding a Ford flathead V8 engine under the hood.

The ship’s frequent missions to the warm regions of Central and South America was the reason for one of our major upgrades.  The existing air conditioning system was insufficient to maintain the desired temperatures, so we were tasked to remove three, 400-ton centrifugal AC units and replace them with 500-ton units.

Another important item on our work list was created by the ship’s deployments to areas without docking facilities.  Before her time in Boston, patients in those areas could only be transported by boat.  The ship had previously been fitted with a helicopter landing deck but was not capable of maintaining her own helicopters on board.  We made the necessary modifications for permanent helicopter storage and supported a company contracted by the navy to install a light-framed, fabric-covered structure to serve as a hanger.

I remember watching her steam out of Boston and remarking that the hanger wouldn’t survive the first gale-force wind, but a recent online photo shows the hanger, or one like it, still in place.  Either the structure was stronger than I thought, or the ship has operated in some pretty favorable weather conditions.

During the Comfort’s overhaul, we were visited by several local doctors curious about her facilities.  A small medical detachment had remained on board during repairs, and I would hook the visitors up with one of them for a good tour of the hospital spaces.  The doctors were all impressed, and one told me that the ship’s capabilities, particularly the triage arrangement, would compare favorably with the best hospitals in Boston.

With the spotlight now on the two ships, the Mercy was soon ready to sail for Los Angeles, but a recent six-month deployment to the Caribbean and South America had left the Comfort with necessary repairs to be made in her homeport of Norfolk.

I have closely followed the news as the escalating crisis in New York compressed a maintenance period originally scheduled for weeks down to a matter of days.  And then late last week, President Trump got personally involved and stated that he would be down on Saturday to see the ship steam out of Norfolk.

Watching from the sidelines, I felt sincere sympathy for the poor soul managing and expediting the repairs, for when the President says he’s coming down to wave goodbye, the ship had best be ready to get underway.