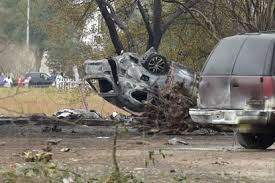 Pictured is Danielle Britt’s vehicle that was struck by a small airplane in Lafayette, La., on a foggy Saturday morning.

A tragic airplane accident that killed five people Saturday and made national headlines because the victims were en route to a major college bowl game in Atlanta had local connections, an Oxford family whose relative is being treated for burns and other injuries.

Danielle Britt was hurt when her SUV was struck and caught fire near the crash site, according to reports Sunday. She is the sister-in-law of Brady Williamson, who was recently elected to the Mississippi House of Representatives District 10.

He will take office Jan. 7, 2020, to fill the seat left vacant by the retirement of longtime state senator and representative Nolan Mettetal of Sardis.

Williamson spent considerable time in Batesville and Panola County during the campaign, and his family owns a small farm here. He posted notices on social media early this week that said he spent time at her beside Sunday and reported she is in good spirits.

His brother’s wife was driving in Lafayette, La., when the private plane crashed about 9:30 a.m., shortly after takeoff. Five of the six people on board, including the pilot, were killed in the fiery crash.

Britt crawled through flames passenger window after the plane struck her car, and crawled to safety. She remained conscious throughout the ordeal, even joking with the EMTs and ambulance drivers.

The plane survivor, and Britt, are in a New Orleans hospital. Reports said she has burns on 30 percent of her body and was scheduled for surgery Tuesday. She will be at the burn center about a month, her husband said.

The National Transportation Safety Board, the federal department that oversees air traffic in the U.S., had investigators on the scene Sunday examining the wreckage and interviewing witnesses.

A national television audience, tuning in for the Peach Bowl between No. 1 LSU and No. 4 Oklahoma, learned of the accident about noon. One of the passengers who perished was the daughter-in-law of popular LSU offensive coordinator Steve Ensminger.

Ensminger coached the game after learning the news from head coach Ed Orgeron a couple of hours before kickoff. Condolences for the victims poured in from across the country after media reports were read.

A GoFundMe account has been established to assist the Britt family. Williamson said in a text message he was thankful for the prayers and messages of support he has received from his future constituents in Lafayette and Panola Counties.

Williamson said the family was especially thankful that Britt’s young child was not in the vehicle. Normally he would have been in the back in a car seat, but was at his grandmother’s house.

Calamity may be coming, shop now for rice &…