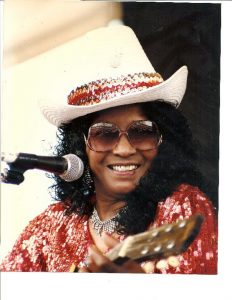 The late Jessie Mae Hemphill recorded “Dare You To Do It Again” in Sherman Cooper’s potato barn in Como.

The year 2019 marks the 15th anniversary of the release of renowned North Mississippi blues musician Jesse Mae Hemphill’s CD and DVD, titled Dare You To Do It Again.

The audio and video recordings were made in 2003—mostly at longtime Como resident Sherman Cooper’s farm, and then were prepared to be released the following year.

The recordings stand as some of the last material put out by the legendary matriarch of Hill country blues music, before her passing in 2006.

Jesse Mae was in a lineage of musicians from the Como-Senatobia area, her grandfather being Sid Hemphill, a multi-instrumentalist recorded in the 40s and 50s by traveling audio archivist Alan Lomax—who also recorded American folk music forefathers Leadbelly and Woody Guthrie.

Dozens of musicians, family and friends gathered for a weekend of celebration and rejoice for the life and work of this extraordinary woman, much of which lasted well into the small hours of the morning.

Fifteen tracks came of what was recorded throughout the weekend, and little attempt was made to deny the public of the full audial experience.  One of tracks clocks in at over 12 minutes; another just north of 24.

“Music and magic came together on an April Fools day in 2003 and history was made in a potato barn on a farm in Como,” Olga Wilhelmine, founder and president of the Jesse Mae Hemphill Foundation said, in reflection of the musical celebration which spawned this album and video documentary.

“Jesse lives on in the recordings she made during her lifetime, the immense influence she had on musicians and artists worldwide, and those of us who shared that spiritual night with her which were ultimately her last recordings,” she said.

Hemphill’s sound has been imitated and drawn from by countless contemporary artists.

The hypnotic and infectious style of guitar playing and singing which she was a master of continues to be attempted and celebrated by performers, yet it’s rarely done so authentically.

The double-CD collection consists mostly of traditional spirituals, performed with accompaniment in a live and impromptu manner, and the DVD contains interviews and video clips encapsulating that moment of time in Como.

Both items are easiest found online at Amazon.com.  The album, or individual tracks, can be downloaded through iTunes, and other vendors.

Some say those who opt out of the recorded documentary of her music and spirit, perhaps in the quiet of a North Panola County night, may still hear Jesse Mae’s voice, somewhere in the distance, moaning in the air.

You can never love or be kind enough