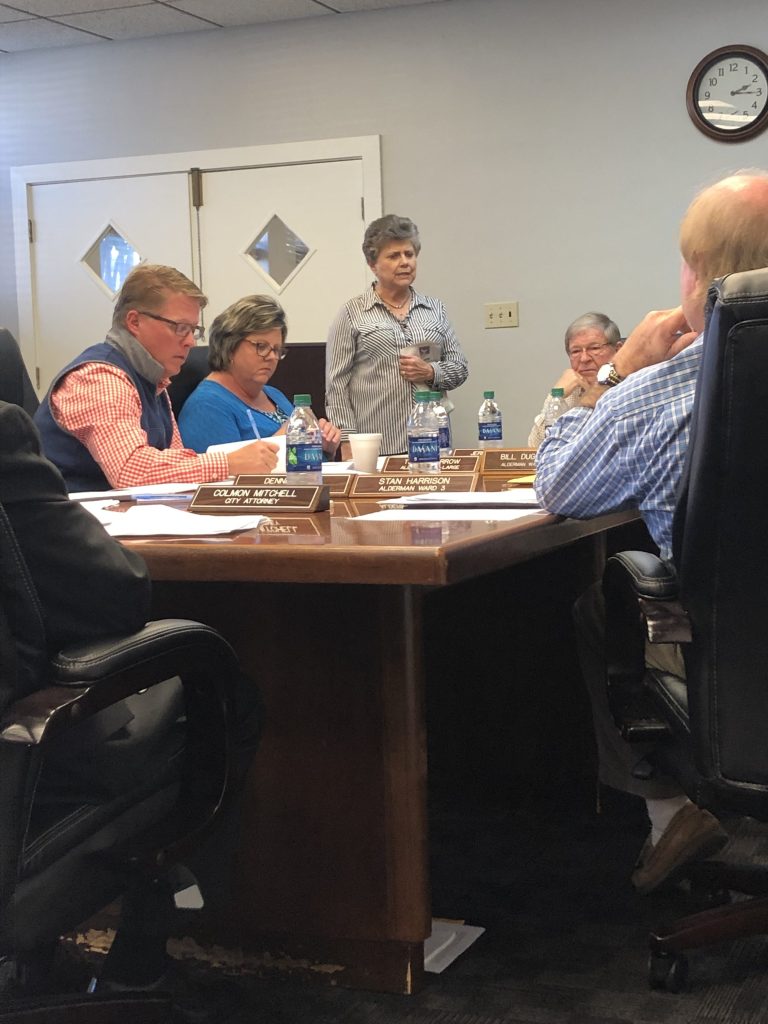 The recently adopted yard sale ordinance in the City of Batesville is unfair, and ultimately hurts the poorest of the poor a resident of Dogwood Hills subdivision told the Mayor and Board of Aldermen at their regular meeting Tuesday.

Linda Mitchell was on the agenda to ask the board to reconsider the portion of the ordinance that restricts a person from placing more than one sign advertising a yard sale on their property, and from posting any signs on public right-of-ways, including electric poles, stop signs, and street markers.

The board passed the measure presented by Code Enforcement Officer Andy Berryhill last month. Berryhill also said the city should limit yard sale permits to one every three months per location and applicant, along with limiting sign placement.

With permission, a yard sale can still be advertised multiple times on different lots of privately-owned property.

Mitchell’s only complaint was about signs. She said Berryhill’s suggestion that people having  yard sales could advertise in the local newspaper, use social media to draw customers, or use word of mouth to spread news of upcoming sales is not practical.

“The people who come to my sales are black, they are white, they are Hispanic, they are Muslim,” Mitchell said. “They are people I don’t associate with on a regular basis, they are not in my circle of friends.”

For example, Mitchell said, she once had a customer who came to the sale with no shoes because his son had sold them for drug money. The man could only afford a used pair of shoes, but would not have known about her sale had he not seen a sign posted away from her Dogwood Lane address.

“We  are not selling new stuff, we sell things that people give us,” she said. “I’m not hurting anyone’s business, I’m helping the poor of the community.” Mitchell told aldermen she doesn’t have sales for her own profit, assuring them she gives half the proceeds to a man who works for her, and part of the rest to a food pantry she operates in Pope.

Mitchell is the only person to have officially complained about the new ordinance, and each aldermen said he had no intention of hurting her yard sales. They only wanted to take actions  that  would make the city’s appearance cleaner and bring uniformity to the yard sale permitting  process.

When alderman Stan Harrison said he likes the new ordinance and applauded Berryhill for taking the initiative to address yard sales, Mitchell reminded him that she was in his voting district.

“Well, I’m personally sick of looking at them. I’m sick of signs on light poles and everywhere else and one way or the other I’m trying to get these signs down. There’s a lot of thought  that went into this and we’re not trying to hurt you, but if I have to worry about somebody voting for me when I’m trying to make this city a better place then I don’t  need  to be here anyway,” Harrison said.

As the discussion concluded, Mitchell said she understood that many people don’t collect their yard sale signs from public view and could appreciate the city’s efforts, but believes the  ordinance goes too far.

“I shouldn’t be punished just because Andy gets out of bed on a Monday morning doesn’t want  to see a yard sale sign,” she said. “Ya’ll have done a fantastic job of running  this town, but this is something that I don’t agree with. It really hurts  me, and I’m an average person.”