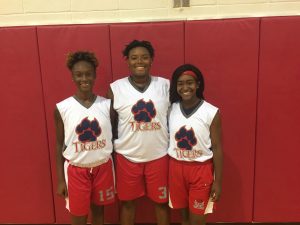 Senior players for the Lady Tigers in the 2019-20 basketball campaign are (from left) Aziyah McGhee,  LaDayshia Robinson, and Teddera Patton, and Takyra Webster. (Brad Greer)

South Panola tips off the season tomorrow at the Independence jamboree as they take on Holly Springs at 9 a.m followed by Senatobia at 11 a.m.

The Lady Tigers return four starters off last year’s squad that finished 13-13 and advanced to the first round of the North State tournament before bowing out to Horn Lake.

After the MHSAA two-year realignment went into effect this fall, South Panola will now compete in Region 3 with Germantown, Starkville and Greenville.

Sixth-year head coach Jemmye Ann Helms is looking forward to get the season underway and excited at the prospects of this year’s squad.

“We are extremely excited in moving into a highly competitive district and are looking forward to the challenge,” said Helms.

“Starkville is always one of the top teams in the state and Greenville lost one game in the semifinals  We don’t know a lot about Germantown, but I’ve heard they will have a solid team, so we will have our hands full when district play starts,” said Helms.

The Lady Tigers have some height at their disposal with 5’11” junior Nahriah Connor and Crystal Mayes (5’10”) that should give South Panola an inside presence.

Helms said McGhee will be looked upon to be one the team leaders both on and off the court this year.

“Aziyah has worked hard this summer and her teammates respect her and will listen to what she says. Having played games during the summer has helped them become more of a unit,” Helms said.

“Overall, I think we will be better and if my scorers will do what’s asked of them, and not shy away from taking the necessary shots, then we’ll have a chance.”

The Lady Tigers will also look to juniors Bailey Ware and Kiersten Clark in the front court.

Helms said once again the Lady Tigers’ athleticism will be the teams strength.

“We are going to play an up-tempo, fast paced defense and put pressure on the ball every chance we get. Offensively we will be the same way as far as getting up and down the floor,” said Helms.

From brothers, to rivals. For the Kitchen brothers from Batesville that was the case last weekend. Louisiana Tech vs. Southern... read more