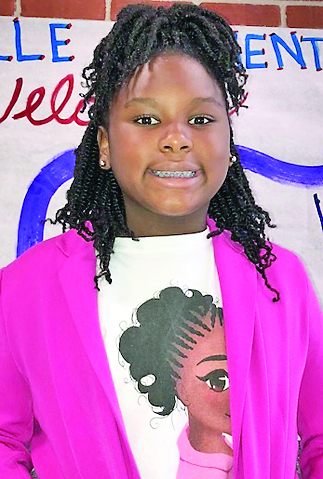 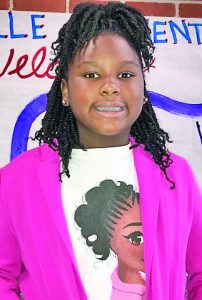 By Jeremy Weldon
Talking to the CEO of Zoe’s Dolls, a Miami company with manufacturing operations in China, is like talking to any other entrepreneur hoping to get a product to market quickly and under budget.
Except she’s 11-years-old.
Zoe Terry was in town Friday, visiting the Elementary School and Batesville Job Corps, promoting her line of dolls and accessories scheduled to hit American markets in late summer.
The child, and it’s hard to remember she is just 11, rattled off a fairly in-depth business plan when asked to describe her company. Design, inventory, distribution – she has a plan for everything, and does it with the enthusiasm of a girl on a mission.
Terry has a Panola County connection – Batesville Elementary Principal LaSherry Irby is her aunt. While visiting relatives was a priority, Terry couldn’t pass up the chance to speak to the children in her target audience while here.
Traveling with young Zoe was her mother, Nakia Bowling, and godmother LaTasha Bratton.
The family stopped in Batesville on their return trip home from New York City where young Terry made an appearance last week on ABC’s Good Morning America.
Profits from the new doll line will be used to fund her charity, which was the beginning of her journey to world-wide traveler and business woman.
Terry is proud of the new “brown skin” doll, especially the feature of inter-changeable hairpieces, something no other doll manufacturer offers.
She has already seen a prototype, and had one to show during her ABC television appearance. “The only thing that was missing was the middle part of the face,” Terry said. “The mold for that part just wasn’t finished yet, but it’s done now.”
The story starts about six years ago when Terry entered kindergarten in Miami. “I was bullied because of the color of my skin, and because my hair was different,” she said. “Also, my motor skills weren’t as good as theirs and some of the kids bullied me.”
Terry had suffered a stoke as a toddler, and is left with a slight slurring of speech, and some coordination difficulties.
Her mother helped Terry overcome most of the disability though, enrolling her in programs that would help her improve the fine and gross motor skills. “I had tennis, swimming, dance, and lots of stuff to do,” Terry said.
The intensive occupational and speech therapy has paid off, and Terry is today only slightly impaired because of the stroke.
To combat the bullying, her mother daily encouraged her, building her confidence and instilling in her the importance of “paying it forward” and giving to those less fortunate.
Terry decided she wanted to “give brown dolls to brown skin girls” at Christmas. From there, the vision blossomed.
“Zoe’s reasoning for wanting to do this was two-fold,” according to Bowling. “She wanted to give toys to little girls less fortunate than she was, and she wanted to combat bullying by letting little brown girls know that they are special just the way they are.”
Since its inception, Zoe’s Dolls has given thousands of dolls to girls across the United States, and in two foreign countries – Haiti and Africa. For now, she gives dolls that have been donated (new in the box) to her foundation, and buys dolls, lot of dolls, with donated money.
With the new doll line, she hopes to be able to sell dolls online, and is already working with distribution experts to get her line placed in major retail outlets.
Her real love, though, is traveling and sharing her foundation’s mission with corporations and companies with the goal of giving more and more dolls to brown skin girls.
Terry’s face lights up when she talks about her African trip. “We were in Zambia for a while and then went to Victoria Falls, which is way cool.” A guided Safari outing topping off the trip. While there, Terry said she was touched by the native children, and hopes for return trips.
The charity, mostly funded by family and friends in the beginning, got a real jump start when she was chosen as a “Point of Light” by the foundation established by former President George H. Bush. She spoke at that group’s national conference, and the phone began ringing.
In the past year, Terry has been a keynote speaker at the United Nations during the Nexus Global Summit, and earned several national awards for her philanthropic efforts.
It was the appearance at the United Nations that earned her the invite to appear on Good Morning America. Just before stopping in Batesville, her mother was contacted by representatives of Oprah Winfrey’s magazine O and will sit for an interview soon.
Terry is also excited about her relationship with the children’s cable network Nickelodeon, and represents that company as one of its Halo Recipients (2017).
For now, she will wait for the production of the new doll line to begin, and continue carrying her anti-bullying message to schools and youth groups.