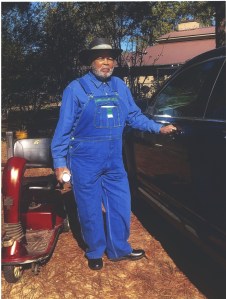 THE LIFE AND TIMES OF REVEREND JESSE L. BUTLER the term “Shucking and Jiving” which was made famous by Rev. Jesse Lee Butler, ended On Wednesday, May 18, 2022, at 8:25 a.m., when Rev. Butler transitioned. Rev. Jesse Lee Butler was born on April 05, 1940, to Odell Butler and Mattie Lou Adams-Butler in Sardis, Mississippi. Jesse enlisted in the U. S. Army at age 15, serving 2 years after which, he received an honorable discharge. Jesse returned home and continued his education at the Batesville Colored High School where he met Glennie Maurice Hardy. They were married in 1958, and to this union three children were born: Ervin Lee Butler, which preceded him in death, Sharon Butler-Bryant and Sheneather Butler. Rev. Jesse Lee Butler leaves to celebrate his homegoing his wife of 64 years, 1 month and 13 days; two daughters, four granddaughters, Shannon, Sherron, Shavonne and Shanee; two grandsons, Julian Bracey and Arthur Bryant, which preceded him in death; five great grandchildren, Sydni Hampton, Sanaa Hampton, Shanel Crawford, Dastin Crawford, Daivon Bryant and Juel Bracey; three brothers, E. C. Butler, Odell Butler and Arthur Nick Butler; three sisters, Mattie Spears, Juanita Emmons and Annie Byrd Perry; five brothers and one sister preceded him in death; one son-in-law, Nathaniel H. Bryant, whom he loved like a son; two grand sons-in-law, Darius Crawford and Jason Steward; three surrogate grandsons, Wilford Powell, Rashad Powell and Renard Hampton; and a host of nieces and nephews. Jesse moved his family to Chicago, Illinois. In Chicago, he worked and established himself as a businessperson and politician. Jesse owned a nightclub, one night, the Jackson 5 performed before they became famous. Jesse opened his home to young people so that they could work during the summer to earn money and continue their education. During Jesse’s later years, he was called into the ministry. He founded the United Life Church in Chicago, Illinois. When he and his wife returned to Mississippi, he founded the Spring Hill Church on Stagecoach Road, but he never lost his passion for politics. He campaigned for Ronnie Musgrove and Leonard Morris, both individuals won their elections. There was never a dull moment in Rev. Jesse Butler’s life. If you knew Jesse, you also knew he loved to play cards. Sometimes, he would play cards for 24 hrs. Jesse Butler was also a movie star (lol). Jesse and his famous car, The Zimmer, were featured in the “Next of Kin” which starred Patrick Swayze and Liam Nelson. The scene took place after a fight between actors Swayze and Nelson. The Zimmer was parked in front of a business and Jesse walked into the business wearing a nice “brim.” Jesse had diabetes, but he loved sweets. He had a special niece that would sneak and cook him pecan and lemon pies. We later found out because we found empty containers underneath his car seat, that he visited Wendy’s and purchased large frosty drinks. To know Rev. Jesse L. Butler was to love him or hate him, there was no in-between. Unfortunately, Jesse’s last illness confined him to his bed for the past 15 months, but he never lost his sense of humor and his faith. Jesse’s desire and request was that he would be cremated the same day of his death. The Family would like to thank Mr. Jerry Cooley for honoring Jesse’s request. During his 15-month illness, his mobility was greatly affected, but we, his family, thanked God every day for keeping and helping us get through these times with endurance, love and faith. The family of Rev. Jesse Lee Butler would like to thank you for your calls, prayers, and whatever part you may have contributed during this time. In the Final Words of Rev. Jesse Lee Butler “Y’all stop Shucking and Jiving.”