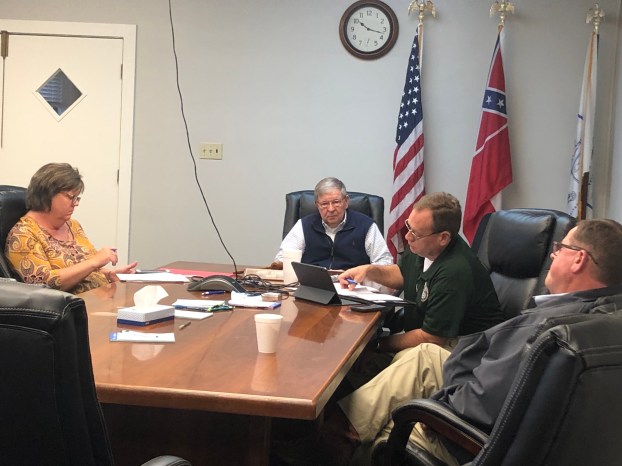 Aldermen are considering a curfew for the City of Batesville with the support of Police Chief Jimmy McCloud. The suggestion was made by Aldermen Stan Harrison in Tuesday’s regular update meeting at City Hall.

Also at the meeting the city board heard updated numbers from the Mississippi State Department of Health about confirmed coronavirus infections statewide. Panola County’s first death, a Crenshaw man who tested positive last week and succumbed to Covid-19 late Monday night, was included in the update numbers.

Chief McCloud also said was in communication with all the grocery store managers in Batesville Monday, noting that the city’s largest food retailer, Piggly Wiggly, has taken further steps to help officials control the number of customers in the store at a time.

“The Piggly Wiggly group is putting more safety measures in place today. They are going to keep one entrance locked and force everyone to come in their south door,” he said. “That way their management team can a little more closely monitor the number that comes into their facility and hopefully reduce the larger families coming in as a group. They are trying to put some things into place and are doing everything they can to help us.”

Overall, food service businesses and retail stores are complying with the regulations the Mayor and Board of Aldermen put into place last week.

McCloud agreed with Harrison that a curfew would help send a stronger message to city citizens, especially those who seem to be ignoring many of the social movement restrictions recommended by health officials and adopted by the board in hopes of curbing the pandemic locally.

“We don’t have to shut the town down, but we might can let people know we are really, really serious now,” Harrison said. “A curfew might wake people up and let them know that we are trying not to go to the final step.”

Harrison suggested a 10 p.m. to 6 a.m. curfew for all citizens other than those coming or going to work, or taking ill patients to a doctor.

McCloud advised that a 8 p.m. to 5 a.m. curfew might work better. “With the grocery stores all closing at eight now, I can’t see where anyone really has any business being out at ten, unless its special circumstances,” he said.

Harrison said an 8 p.m. curfew would be fine with him, but that 10 p.m. is the closing time for several convenience stores currently, and people are accustomed to those hours.

Mayor Jerry Autrey said more thought and consideration of businesses that stay open around the clock was needed, and asked each alderman to think about what would best for citizens. The board discussed Love’s Travel Stop in particular, agreeing that much of that store’s business  comes from motorists getting off for fuel and snacks and then straight back to I-55 to continue their trip.

“I don’t know what to do about Love’s, but if we tell other places to close at a certain time we might have to tell them, too,” Harrison said.

At the end of the update, Mayor Autrey advised board members he is waiting on a report from Panola Partnership CEO Joe Azar on the results from a 10:30 a.m. meeting today with area industry leaders. The board had asked Azar to impress on the local factory managers what measures city leaders expect in the effort to control the outbreaks of coronavirus here.

“There’s already been some meetings and most of the industries are cooperating with us but we have a couple that need to help us,” Autrey said. “If we have a hotspot in Batesville it’s going to be from one of those factories, and it’s up to them to find out where their workforce is coming from, and if they have a plan for their workforce that lives outside the county.”

Public Works Director David Karr agreed, saying the minimum that each local industry should be doing is taking temperatures of every worker as each shift arrives at the site.

Most industries Azar said earlier this week, are taking advanced precautions with their employees’ help, and are constantly cleaning and sanitizing parts of their buildings.

The board is expected to hear an update from Azar about current compliance levels from industries at Wednesday morning’s update meeting.

Before the meeting was closed aldermen also discussed whether steps should be taken to further limit the hours, or number of people allowed inside, at local gyms and workout facilities. Under the board’s latest guidelines gyms and rehabilitation businesses are allowed to operate as normal, with their only restrictions being the 10 or less rule, or 50 percent of their fire occupancy limit if their location is larger than 4,000 square feet.

Aldermen, like many of their contemporaries in other Mississippi cities and the Governor of the state, have been reluctant to put limitations on any businesses, only doing so when they believed it necessary for the public health.

To that end, they have so far resisted calls to issue resolutions that would close gyms, rehab centers, and other similar facilities, along with all small businesses.

“The question we have to ask ourselves is what is our goal?” said Alderman Bill Dugger. “Is our goal to help businesses stay open or is it to protect the people and help prevent the spread of this virus?”

Mississippi’s new numbers released Tuesday morning includes 90 new cases reported in the past 24 hours for a state total of 937. Panola County has 7 confirmed cases. The state is averaging, in the past week, about 90 new cases a day.

A Crenshaw man will presumably be recorded as Panola County’s first Covid-19 death. The Mississippi State Department of Health will... read more