Magazines sorted and ready for the Blue Goose

I’ve spent the entire morning (since my first cup of coffee) looking at magazines and catalogs.

Not for pleasure, but because my magazine basket (a prized find from the famed Batesville Art Mart) was overflowing. It is so easy to toss magazines into the basket, then take them out to reread again and again.

For years, I saved most of my very-well perused periodicals for the Friends of the Batesville Library Used Book Sale, where we offered free magazines for a donation.

Sometimes I’d take them to the hospital for the waiting rooms and DW liked to donate his Reader’s Digests to the Cancer Center.  And I have even taken a couple of stacks to the local Cancer Center….House Beautiful, Southern Living, Garden and Gun, This Old House and Consumer Reports to name a few.

So, this morning DW said he was going to make a trip to Blue Goose today. I’ll explain. We live in Henderson County which does not provide garbage pick-up.  However, the county does have a manned “recycling center,” which takes household waste, metal cans, plastic and paper.

The locals call it the dump.  We call it Blue Goose because it is situated in the area known as Blue Goose, just a mere two miles from our house, though we live outside of the official Blue Goose community.

Blue Goose has a sordid past it seems, home to a lot of dancing and carousing, beer drinking, fighting and gambling back in the 1920s and 30s. A Mr. Cogdell built a general store and filling station on his family’s old home site after WW1 and came up with the name of Blue Goose after seeing the “Blue Goose” brand on a crate of fruit. His grandson remembers it to be either apples or oranges.

He was so taken with the blue goose that he made a pattern from the original, cut it out of wood, painted it blue and hung it out front.

The story goes that noise from the raucous activities going on at Blue Goose could be heard clear into the next county, which is Madison, two miles to the west.  Evidently the lively goings on gradually came to a stop during WW2 and eventually Blue Goose settled into a quiet little Tennessee country community.

Mr. Cogdell’s store and station closed in 1994. He is buried in the family cemetery right next to the house now situated on the same spot where his store was; his family members continue to gather there often to visit.  The original duplicate of the inspiring Blue Goose sign still hangs in the front yard of the Cogdell home over on Highway 412, which we pass on our way to the recycling center.

My favorite magazines and old catalogs dating back to December (no wonder the basket was overflowing) will today go to that recycling center.  Because of the threat of Corvid-19 nobody wants used magazines anymore. If you’ve been to a doctor’s office, the dentist, any healthcare facility or even the library you’ll note that there are no magazines in the waiting areas.

Recycling is the next best thing.

So, I’ve spent the morning taking one last look at my magazines and tearing out recipes, landscaping ideas, pictures of plants and flowers, more projects for DW, activities for the grandchildren, inspiring decorating ideas and crying a minute over a Garden & Gun dog story I’d missed.  And, I found a paint color for the laundry room.

I’m afraid that when DW learns that I’m wanting to paint the laundry room you’ll be able to hear him clear past Blue Goose. Magazines always get me into trouble like that. 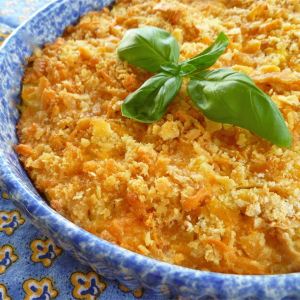 The squash harvest is on!

Cook squash, onions and 3 ½ teaspoons salt in boiling water in a Dutch oven, about 25 minutes. Crush or process 10 crackers into crumbs. Drain; coarsely mash squash mixture with a fork.  Add crushed crackers, ½ cup of the cheese, mayonnaise, egg, butter and remaining salt and pepper.  Stir well. Pour into a lightly greased 11 x7-inch baking dish or casserole.  Crush the other crackers; sprinkle over the squash mixture.  Top with remaining cheese. Bake in 350-degree oven, uncovered for 30 minutes or until bubbly. Let cool 5 minutes before serving. So good with fresh green beans and sliced homegrown tomatoes.

Don’t overlook the neglected children around us