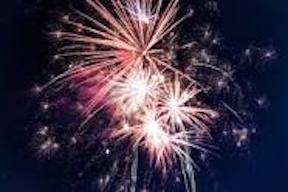 Batesville Police report an increase of telephone calls from citizens complaining about the noise of fireworks, and are keeping a close watch on firework activity approaching the Independence Day holiday.

Deputy Chief Kerry Pittman said although dispatchers field many calls about fireworks, most of the time the shooters are abiding by city ordinance and doing nothing wrong when discharging the items from their own property.

That’s because Batesville has a rather liberal firework policy, allowing more days and longer hours of shooting than many other municipalities. While some cities and towns have banned the shooting of fireworks around holidays, the Batesville board, with the blessing of the police department, wants families to enjoy fireworks as long as done responsibly and within the city statute.

“People have called and complained about fireworks at eight or nine at night, but the ordinance says they can shoot them until 10 p.m. right now,” Pittman said. “Most people understand when we tell them about the ordinance. Anyone shooting fireworks after that will get a visit from an officer. So far we have only given out warning, but there are fines for breaking the ordinance.”

Batesville’s ordinance defines fireworks as “firecrackers, Roman candles, torpedoes, sky rockets, and any and all explosives commonly known and referred to as fireworks.”

The ordinance further states “the term fireworks shall not include auto flares, toy pistols, toy canes, toy guns and other devices in which paper caps manufactured in accordance with the United States Interstate Commerce Commission regulations for packing and shipping of toy paper caps are used, or toy pistol paper caps manufactured as provided under the law, the use of which shall be permitted at all times.”

Dates allowed for the selling and shooting of fireworks each year are June 15 through July 5, and from Dec. 20 through Jan. 2.

Violation of the firework ordinance is a misdemeanor punishable by a fine of $100 for the first offense, $200 for the second, and $300 for a third and subsequent offenses.

“We want everyone to enjoy fireworks this time of year, and to shoot them in a safe way, but also remember the city has an ordinance and officers will enforce it when needed,” Pittman said.

Panola cases up another 14; state up record 526