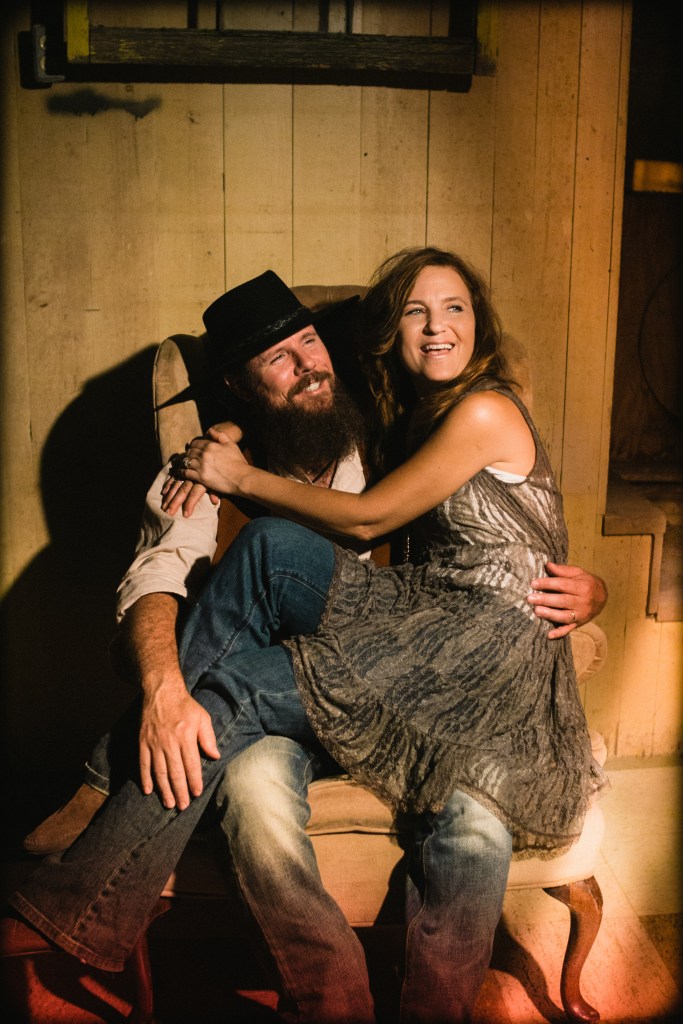 The interruption to the live music world brought on by the Covid-19 health crisis has caused performers to have to improvise, and turn to other ways for showcasing their talents.

For the past couple of months, Blue Mother Tupelo, musicians out of Como, have replaced concert tour dates with a series of home, streaming-video events.

The group consists of couple Ricky and Micol (pronounced like Michael) Anne Davis, with sometimes additional accompanists.  The couple wrote and recorded songs in Hendersonville, TN, outside of Nashville, for over twenty years before moving to Panola County–being drawn by roots to the Mid-South.

“We are grateful to have been receiving really warm responses from folks who’ve tuned-in near and far,” said Ricky Davis, of the weekly live video streams shared on their Facebook page.  “From our neighbors here in Como, all the way to folks tuning-in online as far as Paris, France.

With performance locations sometimes influenced by the weather, Blue Mother Tupelo has varied the locations for staging videos around the property, inside and out, since the series of performances in the effort of distancing began back in mid-March.

Usually there’s a simple setup of a keyboard on a stand, and a couple of tambourines on hand, along with the acoustic guitar strapped around Ricky’s neck or on his knee.  Often one of the Davises will leave sight, and the other will continue the music, or viewer interaction, by playing solo, sometimes instrumental.  There is also a virtual tip jar link, so viewers have the option to show support.

The song selection of the at least-weekly events have leaned toward original songs, and some covers, and driving or melancholy gospel.  There are also breaks for enjoyable a cappella traditional renditions, such as with Wish I Was In Heaven Sitting Down.  Appreciators of the music of Delaney & Bonnie (Delaney Bramlett from Pontotoc, MS), from the late-60s and early-70s, will take quickly to the couple’s sound.

“People have shared their enjoyment of the live streams, and we are so grateful to have a way we can contribute to bringing some joy where it’s needed,” said Micol.  “Last week we felt the urge to invite a few locals to come watch the live stream in person, which some had voiced an interest in – all spread out responsibly distanced,” she assured.  “Many have come to expect at least a weekly live stream now.”

For many musicians, the joy of live shows and travelling drive the spirit, but experimenting performing from the comforts of home isn’t without positives.  “There’s nothing that can replace in-person energy, as we experience at our live shows, but being home and making music has its charms,” Micol said.  “It felt very strange, at first, playing music into the iPhone hoping that we’d have some folks click in to listen,” she added.  “However, we enjoy getting to ‘go to work,’ if even in this unusual way.”

“If the weather is nice, we do some outdoors, if not – or for Micol to play her upright piano, we’ll do them inside,” explained Ricky, of the flexibility of home broadcasting.

“We typically play the weather and our vibe by ear, so we never know for sure whether it will end up on the cabin porch, in the yard, or in the living room,” Micol added.  Often a friendly dog, Jojo Loretta, can be seen giving greetings in between songs, or a bottletree in the yard might be part of the backdrop.

“We have tried to go with the flow regarding which day of the week we would go live, so we’ve honored ourselves in that way, by following our guts,” she said.  “It has been mostly a joy to be able to do this while not being on the road, and we’re thankful to be able to share our music from our home, a place that we love. With our animals, wonderful neighbors, a community that has been awfully good to us, and folks that have embraced us from afar, we are so grateful in these uncertain and questioning times.”

“There is a special kind of connection that is made when we can share our music in-person that is certainly different when making music online in a live streaming concert setting. The instant feedback from a live audience, for one,” continued Ricky Davis on the opposing two ways for reaching fans.  “But there’s also a musical intimacy that’s shared in the live streams from home that is different from performing in a club, concert hall or festival setting.  When we do our shows from home, for the most part, we do them totally acoustic (not running into any PA system). There’s something really enjoyable about doing totally acoustic shows.

On a last note, weighing in on life on the road versus connecting with audiences solely from home, Ricky reflected that, “traveling to different places and being out on the open road is pretty amazing too. And it can wear on a person. For example, sleeping in different hotels after shows from town to town…I love traveling the open road, and I love home too. We do miss being around music lovers in-person though.

Another installment of Blue Mother Tupelo’s Happy Hour from Home will stream live from Como, on Saturday, May 23 at 5pm.  Past weeks of the ongoing live streams can be viewed at facebook.com/bluemothertupelo.

No Panola paving with lottery money