‘Water as natural as it can be’ 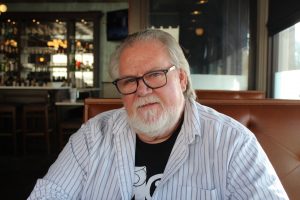 Westbound into Batesville on Hwy. 6, motorists may see what appears to be a brand new blues club on the north side of the road, but in fact it’s an interesting business  called Blues Water.

Established in 2018 by George Farrish and Casey Lipe, Blues Water actually bottles water on site which comes from an artesian well.  The well is drilled into the Upper Wilcox Aquifer of North Mississippi, a local natural source of groundwater known for its good element content.

Farrish, who built the successful Panola Paper business with his family, pursued the Blues Water concept with Lipe because of his extensive knowledge of the process of locating and removing the best water from the earth for bottling.

“It’s very misunderstood where our water comes from,” said Lipe.  “A lot of people think that when you drill a well, you drill down and find this big cave or this big void in the ground that’s full of water, and you tap into that and pump the water out of there – well that’s not the case. Rain water soaks into the ground and forms underground aquifers of water.”

Lipe, who owns four water systems in the area, including locations at Enid Dam, and near Sardis Dam, is familiar with aquifers as a result of work drilling wells all over North Mississippi throughout most of his life.

“When my father got out of World War II, our water well driller’s license in the State of Mississippi was 001,” said the Panola County native.

So, from years of experience, Lipe happened to know where there was this very good aquifer about halfway between Batesville and Oxford.  “That’s where we pull our water from, just because I knew that it didn’t have any iron, didn’t have any magnesium, didn’t have sulfur – didn’t have any of the things that have to be treated. I was looking for water that we could pump right out of the ground.”

He related the challenge of obtaining the water by describing how a 5-gallon bucket full of dirt, with a bunch of holes punched in the bottom and a running hose in the top, would fill up and overflow, with only drips of muddy water coming out the bottom.

While, if the bucket is filled with coarse sand and you run a hose in the top, it would never fill up.  Instead, water would run through the bottom faster than you could put it on top, because it flows quicker through sand than dirt.  And it flows even quicker through gravel, and bigger water-bearing rock.

“You drill down through different layers of clay, dirt, rock, whatever, and you get into what’s called a water-bearing aquifer,” he explained further of Blues Water’s nearby source.  He also said that compared to Batesville’s aquifers which run around 1,000 feet, Blues Water’s comes from a mid-range depth of about 400 ft.

A common domestic backyard water well around North MS might measure between 50-200 ft., on average.  Lipe himself has one that runs about 60 ft. deep and can pump 50 gallons a minute, that he describes as a “rock n’ rolling little ole well.”

Lipe also made a point of addressing the argument of well water versus spring water, and the misconception that spring is more natural, possibly because of how it’s marketed.

“It’s pretty much the same whether you’re digging a hole to get to it, or if it’s running out of the ground – it’s from the same place,” he remarked.

Lipe welcomes anyone to stop by the headquarters and observe the process.  “We bought a pretty fancy machine from San Antonio that washes, sterilizes, fills, and caps.

“You put in an empty bottle and it’s supposedly a one-man operation,” he jokes.  “If you’re a younger man than me, one guy can do it.  You load them in and you never move from one spot really, and it goes through a carousel of washing with high temperature soapy water, then rinses with ozonated water.”

Although the small business mainly caters to industrial, municipal, and commercial delivery accounts in order to stay afloat, they offer a sampler taste to visitors at their Hwy. 6 East location.

Inaugural inductees will be honored at banquet March 28 Staff Report Ten athletes and coaches will be inducted into the... read more