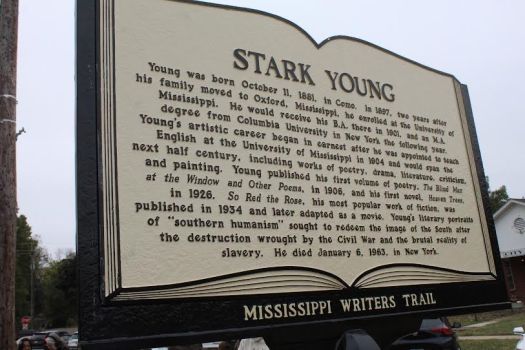 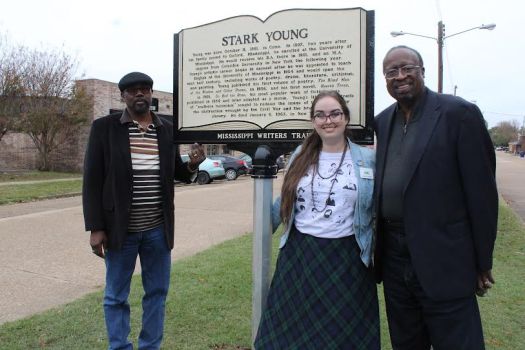 Over the weekend, the newest Mississippi Writers Trail marker was unveiled in Como and is located at 104 Main Street.

The latest marker memorializes the artistic contributions of novelist and playwright Stark Young, who was born in Como on Oct. 11, 1881. His father, Alfred Alexander Young, was a physician. His mother, Mary Clark Starks, was a direct descendant of the McGehees, an old planter family; she died when he was nine years old.

Shortly after her death, Young was sent to live at the McGehee Plantation in Senatobia

Young entered the University of Mississippi at the age of 15 and graduated from that institution in 1901. He completed his Master’s Degree at Columbia University in New York in 1902.

While teaching at various colleges throughout his career, Stark produced artistic works including literary translation, poetry, drama, literature, criticism, and painting. He published his first volume of poetry The Blind Man at the Window and Other Poems in 1906.

In 1926 Stark Young wrote his first novel Heaven Trees. In 1930, Young contributed to the agrarian manifesto, I’ll Take My Stand. He was one of 12 Southern writers, a group including Allen Tate, known as the Southern Agrarians.

Young drew on the traditions of his Southern upbringing for inspiration. He wrote essays, journalistic articles, and collections of stories that drew on these sources. He also published four novels dealing with Southern themes.

So Red the Rose (1934), often called Young’s finest novel, had a brief period of popularity as the archetype of the Southern Civil War novel and dealt with the aftermath of the war.

In 1935, his novel was adapted as a film of the same name directed by King Vidor and starring Margaret Sullavan. Described by its author as a novel of the affections, the book is still in print. The phenomenal successes of Margaret Mitchell’s Gone With the Wind (1936) and its film adaptation of 1939 pushed Young’s book into the background.

The Mississippi Writers Trail pays tribute to the state’s most acclaimed and influential writers through a series of historical markers that recognize the importance of place in an author’s life while educating the public about the history and legacy of Mississippi writers.

“This statewide community improvement activity connects historical preservation, tourism and transportation,” MDA said. “The cast aluminum markers, shaped like an open book, inform travelers and highlight information about local authors including their birthplace, home, gravesite, museum, or literary locale. These markers will eventually span the entirety of the state from the Gulf Coast to the Hills.”

Como Mayor Everette Hill said when you think about the many world-famous writers from Mississippi, it is an extra special honor that Stark Young – and Como – were selected to receive a marker.

“After all his worldly travels, he ultimately came home again,” Hill said. “He was a native son with a worldwide impact, and this new marker on Como’s Main Street will forever make our citizens proud.”

Visit Mississippi Director Craig Ray said Stark Young was one of many voices for the Southern experience who translated the beauty and complexity of the Magnolia State into the written word for all to read.

“Stark Young was an outstanding writer and educator. He certainly put Como on the map during his brilliant career,” Sanford said. “I remember reading about him as a child and I was pleased to be a part of the unveiling of a marker recognizing his accomplishments.”

“It is always exciting to see these cultural trail markers bring positive attention to Mississippi communities and to share the remarkable contributions of Mississippi artists to the tapestry of American literature,” Ray said.

Young was inducted into the American Theater Hall of Fame, as well as the New York University Hall of Fame. He was the recipient of Creative Arts Medallion from Brandeis University and the Southeastern Theatre Conference’s Distinguished Career Award. Additionally, he received the Order of the Crown of Italy for a series of lectures on American theater. He gave them in Italian as a Westinghouse Lecturer in Italy.

He served on the board of New York University and was a theater critic for the New York Times.

Young suffered a stroke in May 1959 and died four years later. He was buried in Friendship Cemetery in Como.