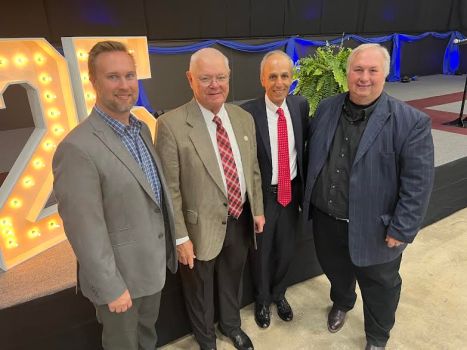 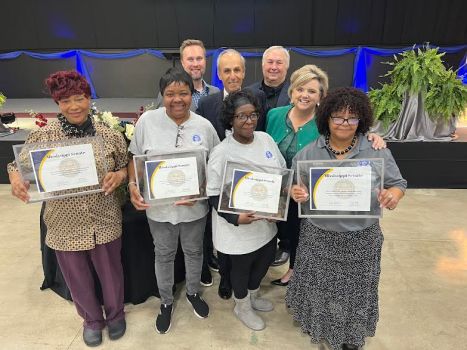 Blauer Manufacturing hosted a 25th anniversary celebration for its Mississippi facility on Wednesday, Oct. 19, at their Batesville location on Crown Dr., in the Harmon Industrial Park. Employees and guests were treated to a catered lunch by Taylor Grocery and company CEO Michael Blauer came from his Boston headquarters to take part.

Blauer, which produces a full line of protective wear, gear, and accessories for first responders, has grown into an international company with policemen, firemen, and military contractors wearing and using their products daily.

Michael Blauer spoke briefly to the crowd, which included local officials and outside sales teams that have helped grow the company. Blauer’s facility was in Oxford for 20 years, but moved to Batesville in 2018 when a deal was finalized to take over the then-empty Batesville Casket company that had closed when that industry moved its operations.

The Batesville facility is under the management of father-son team Elvest and Justin Cook. They recognized employees with five, 10, fifteen and 25 years of employment. Both Blauer and plant manager Justin Cook stressed that working for the company is more than an employer-worker relationship, but rather an opportunity for a career in a family-oriented industry.

“I’m thanking you for everything that you do, and for what you’ve done to make this business a success over the past 25 years,” Blauer said. “For those who just came on board, you have a career here and a real future. Police chiefs one after another come up and say thank you for making our uniforms so good and something our officers are proud to wear.”

“You do a great job making these people look good and feel good while they are doing their job as law enforcement officers,” he said.

Blauer Manufacturing was founded in 1936 by Louis Blauer as a contract sewing company for garments for department stores in the Boston area. The early products included exclusive dress raincoats, jackets and sport coats.

The workforce in the original factory was diverse. The first and second generation Blauer family, including Louis and his son Aaron worked alongside employees from Portugal, Poland and Greece to create high quality functional apparel.

Throughout the Blauer history, the family has helped to define many of the standards which are now in place to protect public safety professionals throughout the United States.