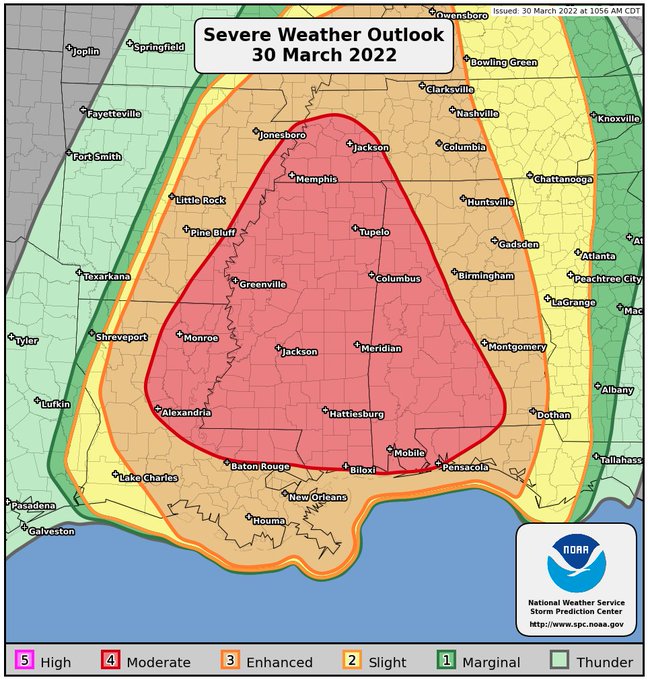 From The Weather Channel

Damage has been reported from a likely tornado earlier this morning in Springdale, Arkansas. Tornado damage in St. Joseph, Missouri, from Tuesday night has been rated EF1.

Storms will intensify through the day and continue into the evening hours of Wednesday as they spread eastward.

Strong to severe storms could hit areas from far eastern Texas into Louisiana, Arkansas, Mississippi, Alabama, Tennessee, the Florida Panhandle, southeast Missouri, southern Illinois, southern Indiana and western and central Kentucky. The chance of severe storms could extend as far east as western and northern Georgia and eastern Tennessee by late Wednesday night or the early morning hours of Thursday.

The main instigator for the severe weather will be a squall line of storms advancing from west to east across the South and lower Ohio Valley. There might also be some isolated supercells that develop ahead of this line that produce severe weather.

Widespread damaging winds, tornadoes and large hail will all be hazards, especially in areas shaded purple and darker red in the map below. Wind gusts could top 75 mph in some areas, and strong tornadoes (EF2 or greater damage) are possible.

Heavy rain might contribute to localized flooding in parts of the South and Midwest.

Be sure you have multiple ways to receive warning information and have a plan for taking shelter if you are in the areas at risk for severe weather.

There could be a continuation of severe storms from this system in the East on Thursday.

Damaging wind gusts would be the primary concern from any severe storms that develop from portions of the mid-Atlantic into the Southeast. A few tornadoes cannot be ruled out.

The threat of severe weather from this storm will be over by Friday.