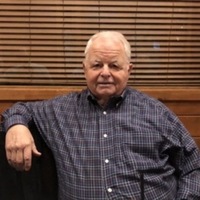 Tommy was born in Batesville on Sept. 9, 1949, to Agnue and Marie Austin. He grew up in Crowder,  graduating from Crowder High School where he was voted Best All Around by his senior class, Class Officer, and Vice President of the FFA. He played football and was involved in 4-H and the annual staff. He enrolled at Northwest Junior College where he studied drafting and design.

Tommy went to work at Jess Haley & Associates engineering firm in Clarksdale. In 1975, he married Judy Cox. He went on to have a long career with Tennessee Gas Pipeline where he retired. After retirement, Tommy did part time work for Kestrel Engineering.

Tommy loved the Lord first and foremost. He spent his entire life worshipping at Crowder Baptist Church where he served as deacon, Sunday School teacher, and Sunday School director. He was very instrumental in the planning and fundraising for the fence project at the Crowder Cemetery.  He also went on a mission trip with the church to Arizona.

Tommy enjoyed traveling, camping, Civil War battlefields, spending time in the woods, watching westerns, and watching Ole Miss football. He could often be found drinking coffee with his childhood friends and swapping stories, many of which can’t be told. His favorite thing to do was spending time with his grandkids.

Tommy is survived by his wife, Judy Austin of Batesville; two sons, Cory Austin (Courtney) of Batesville, and Ty Austin (Faith) of Jackson; one brother, Raymond Austin (Bettie) of Batesville; and three grandchildren, Mc, Maggey, and Madden Austin. He is preceded in death by his parents, Agnue and Marie Austin.

In Lieu of flowers memorials may be sent to Crowder Baptist Church or Crowder Cemetery.

His funeral was  held at Crowder Baptist Church Wednesday, Feb. 9.