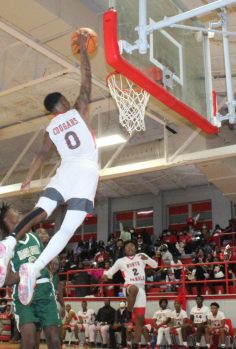 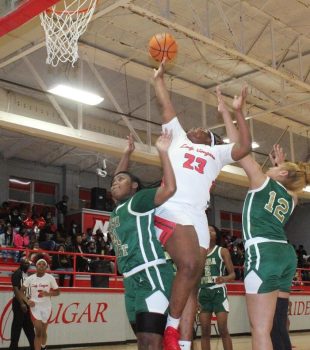 The North Panola Cougars closed out their regular season home schedule last Thursday (Jan. 20) with a pair of convincing wins over Rosa Fort to remain undefeated in district play.

On a night where five senior Cougars were honored during pregame, it would be only fitting to have senior guard Cedquavious Hunter tie the school scoring record with 55 points to help lead No. 3 North Panola (19-4, 6-0) in a rout over the Lions.

The Cal-State Bakersfield signee finished the night 24-of-39 from the floor and 6-of-12 at the freethrow line while blocking three shots on the defensive end.

North Panola overall shot a sizzling 61 percent (46-75) field goal percentage but was only 10-of-24 at the charity stripe.

Hunter received more than enough support from his teammates as nine Cougars got into the scoring column including sophomore Southern Mississippi football commit J.J Harrell who garnered 14 points on the night with a series of  rim-rattling dunks that brought the crowd at the Cougar Den to their feet.

Jaqwan Gale added 12 points, nine of which came in the first quarter

North Panola led 24-16 after one quarter but began to pull away in the second period and led 49-33 at intermission. Senior Ferenzo Cannon registered seven points while Marterrion Renix added six. Other scorers included, Jakeen Bowdery with four,  seniors Tony Davis, Jr. and Jamarion Loveberry with three each, Dee Brown with two and Aston Clay with one point.

Much like the boys, the No. 4 ranked Lady Cougars had no trouble with the Lions as five players surpassed double figures. North Panola jumped out to a 12-0 before Rosa Fort got on the board at the 1:25 mark of the first period.

Before the night had ended the Lady Cougars (16-6, 6-0) connected on 12 treys from beyond the arch. Senior D’mya Williams added 11 points while Ranya Simmons came off the bench to provide ten points.

North Panola was scheduled to travel to Byhalia Tuesday (Jan. 25) and will have an extended break before finishing out the regular season next week (Feb. 4) at Independence.