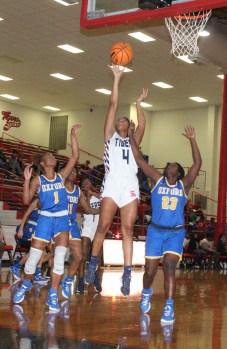 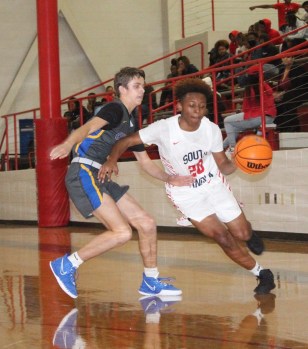 The South Panola Lady Tigers ran their winning streak to three games with an 84-50 pasting of Pine Grove Friday (Dec.17) in the Tupelo Christmas Tournament. The Tiger boys did not take part in the one-day tournament.

Against Pine Grove, the Lady Tigers (5-7) had five players in double figures as KaMiyah Griffin led the way with 22 points and eight rebounds while Shania Fondren posted a double-double with 19 points and 15 boards.

South Panola hosted Tupelo Tuesday (Dec.21) before closing out their 2021 portion of the schedule Dec. 28 in the Desoto County Tournament. The Tiger boys will take on Independence at 11 a.m followed by the Lady Tigers squaring off Independence at 12:30 p.m.. Both teams will play at the Desoto Central Middle School Gym.

If there is one thing expected of a Sylvester Kilgore, Jr., coached basketball team it’s going to be their ability to play defense.

Playing in their next-to-last game before Christmas break, the Tigers put the defensive clamps on visiting Independence by holding the Wildcats to 11 second half points to earn their second victory of the season Thursday (Dec.16)

South Panola (2-10) received a game-high 18 points from Keitron Jones and nine points on a trio of three pointers from Eric Bibbs to pull away from the Wildcats in the fourth quarter.

The Tigers nursed a 38-34 lead after the third period before a three point play by Jones and a trey from Bibbs made it a 46-36 contest with 4:34 left to play. There were some anxious moments in the final 90 seconds as South Panola turned the ball over on straight possessions but were to hold on for the victory.

Hamilton provided six points while Patton garnered five as Paris Morris finished with three points. South Panola took a 35-25 advantage at intermission before Independence tied the game at 35-35 going into the fourth quarter. The Lady Tiger blew the open in the fourth period on the strength of Wilson’s six straight points with 4:01 left to play.

Oxford had no answer for Fondren as the six-foot-two freshman recorded a double-double with 22 points and 16 rebounds to lead the Lady Tigers to the victory last Tuesday (Dec. 14). South Panola had three other players reach double figures in scoring as Hamilton added 16 followed by Patton’s 15 and Griffin with 10 points.

South Panola controlled the game from the opening tipoff and led throughout despite turning the ball over 29 times. The Lady Tigers led by as many as 18 points in the second half before Oxford trimmed the deficit to eight points with 4:52 remaining in the fourth quarter.

South Panola began to pull away down the stretch  with the help of Patton’s three free throws and a three pointer from Emerie Johnson who finished the game with five points. Jada Wilson supplied three points and Paris Morris finished with two.

The Tiger Junior Varsity squad opened up the four game set with a 21-12 win over Oxford.

The Chargers broke open a 37-30 halftime lead with a 10-0 run in the third quarter to pull out the victory over South Panola.  The Tigers were led in scoring by Jayden Smith with 12 points while Derrick Weston and Tyer Lee provided 11 points each. Keitron Jones added ten points followed by Khristian Cole with five.

After hitting nearly 50 percent (13-27) from the floor in the first half, South Panola misfired on its first seven shots to begin the second half before Lee ended the drought with a free throw at the 5:32 mark. Smith drained the Tigers first field goal of the quarter less than a minute later with a three pointer to close the Charger lead to 49-38.

Oxford took a 51-40 advantage after three quarters and maintained its lead over the final eight minutes. Both teams came out hot in the first quarter as the Chargers grabbed a 27-18 lead behind eight points from Miles Luber’s eight points. Lee meanwhile connected on his first four shots from the floor for eight of his 11 points on the night.