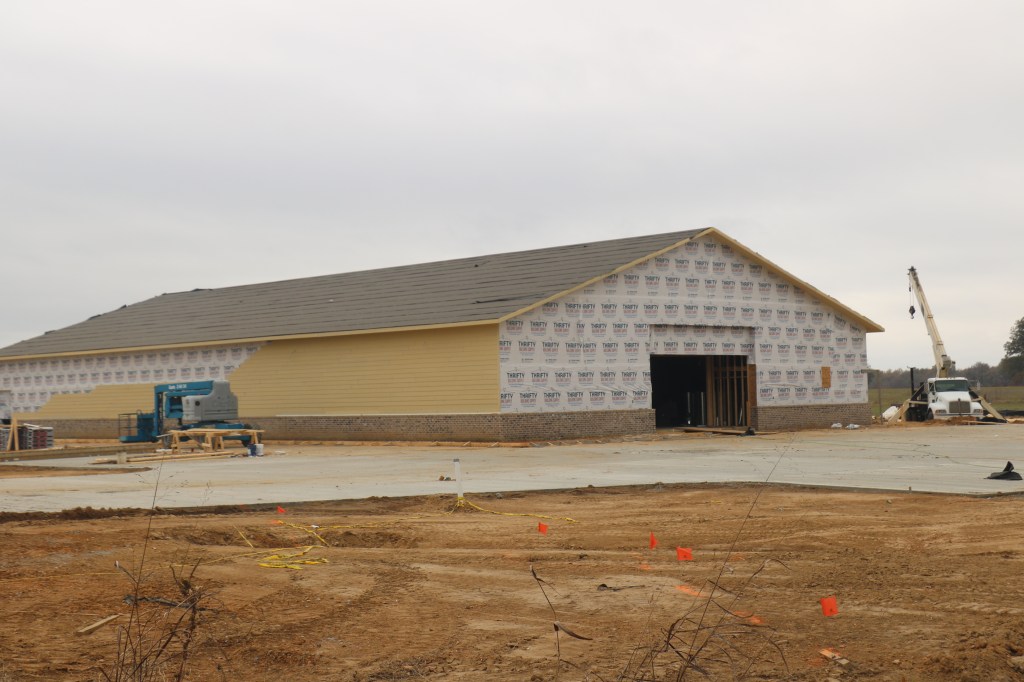 Site preparation work has started for what will be Panola County’s eighth Dollar General store. The latest site is east of Batesville on Hwy. 6, and one that residents of Wildwood Subdivision tried to stop.

ShepCo Inc., began dirt work there last week, even as another Dollar General on the west side of Batesville is nearing completion and will open soon.

When the current construction projects are completed, Dollar General will have four retail stores on Hwy. 6 inside, or close to, the city limits of Batesville, one just off I-55 at the Pope exit, one in Sardis, one in Como, and one in Crenshaw.

The last two stores being built each faced opposition when presented to the county’s Land Use and Development Commission, especially in the case of the store planned for the east side of Batesville where residents of Wildwood objected to the location based on safety concerns.

Of the 39 households in the subdivision, 38 signed a petition asking the land commission, and then the Board of Supervisors on appeal, to not allow the variance Dollar General needed to build on the property. In the appeal, only Supervisor Chad Weaver voted against the variance.

The lone household in Wildwood not appearing on the petition was that of Joe Azar, who said he couldn’t attach his name because of his position as CEO of Panola Partnership, the office that serves as the chamber of commerce and economic development leader for Batesville and Panola County.

At a series of meetings earlier this year Azar was put in the unique position of supporting the expansion plans of Dollar General in his role as economic developer, and against the proposed location out of concern for the safety of his family and neighbors.

Azar said he has worked all year to create a sense of urgency at the Mississippi Department of Transportation for traffic safety plans on the busy  stretch of highway between Oxford and Batesville, once it became clear that Dollar General would build across from the subdivision’s entrance.

Wildwood residents, and Azar, had hoped the Dollar General investors could find another location closer to an established road that would give the new store other entrance and exit options not located on Hwy. 6.

Instead, Azar said he has focused on convincing MDOT officials that serious traffic studies need to be conducted, particularly seeking a J-Turn for the area, like the one the state made for the Terza Road intersection.

At the appeal hearing, supervisors agreed that traffic patterns will be changed, and more opportunities for accidents will be present when the Wildwood location is open. Speeds of 70-75 mph are not uncommon in that area, and residents of the subdivision said there are often vehicles traveling at high speeds driving past as they attempt to turn into, or exit, Wildwood. Sharing that same area with traffic coming and going from Dollar General will add to the danger, they said.

Supervisors said MDOT has the responsibility of keeping the highway system safe, and making upgrades as growth warrants.

The Dollar General store that will open next is almost finished at the corner of Hwy. 6W and McDowell Road. That location also had an objector at the Land Development Commission hearing in the summer, this from Lee Masterson, who owns property across the highway from the new Dollar General.

Masterson pointed out that his family’s driveway will almost meet the Dollar General driveway in an area where highway traffic usually exceeds the posted 55 mph by 10 or 15. That piece of Hwy. 6 is a two-lane road congested with traffic coming to Batesville and employees of ACI Building Systems changing shifts.

Dollar General representatives, at hearings for both of the most recent locations, told county officials the designs of each new store will be consistent with the area, and the buildings will be kept neat, with highway front appearance in mind.

The store east of Batesville will reportedly be all brick with minimum signage and a paint scheme consistent with other locations.

The McDowell Road store will be one that Dollar General is using at a few select locations, and will have the appearance of a “country store” without the standard franchise look.

Photo: The Dollar General at the corner of Hwy. 6W and McDowell Rd., is nearing completion.