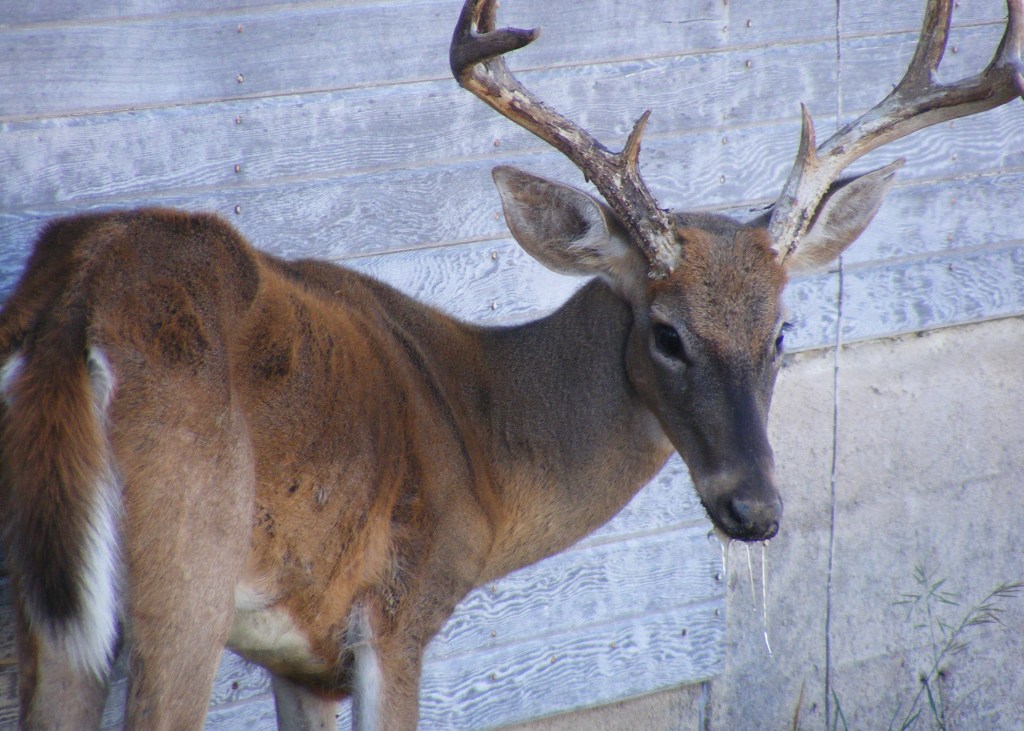 Chronic wasting disease has an incubation of 16-20 months. Deer only look sick for the last six to eight weeks of their lives. (Submitted photo Game Warden Mike Hopper/KDWPT) Alt text -- An unhealthy deer stands next to a wall. ###

A 100% fatal, transmissible, neurogenerative disease has entered the Mississippi white-tailed deer population, and hunters play a big part in controlling this disease.

Chronic wasting disease, or CWD, is a prion disease that is easily transmissible to deer through saliva, feces, urine or a contaminated environment. The amount of positive material needed to infect deer 100% of the time is the size of one very fine grain of sand. Conditions are ripe for CWD’s spread when an infected deer congregates with other deer in a small area, such as around a salt lick or feeder.

“Hemorrhagic disease is viral and common among the deer population, but while it can be catastrophic in certain locations and years, that disease cycle has an endpoint,” Strickland said. “This does not happen with CWD.”

“More importantly, there is no annual end point, such as the arrival of cold weather,” Strickland said. “Once the disease becomes entrenched in a population, it is very difficult, if not impossible, to do anything about it.”

William McKinley, deer program coordinator with the Mississippi Department of Wildlife, Fisheries and Parks, said the disease is similar to Creutzfeldt-Jakob disease and Bovine Spongiform Encephalopathy, or mad cow disease. Unlike mad cow disease, which transmits to humans at a very low rate, CWD has never been known to transmit to humans.

“CWD infects white-tailed deer in Mississippi, and elk, reindeer, moose and red deer in other areas,” McKinley said. “It’s been found in 26 states and three Canadian provinces, as well as in four other countries.”

CWD was first identified in 1967 in a captive mule deer in Fort Collins, Colorado. There is speculation CWD may have mutated from scrapie, a disease similar to CWD that infects sheep. In CWD’s 16- to 20-month incubation period, infected animal shows no signs of disease.

“When the animal becomes clinical, they begin to stumble, are listless, lose weight and forget common things,” McKinley said. “It is comparable to a sped-up version of dementia in humans.”

Physically, the disease causes holes to form in the brain, and when a hole is formed in a region that controls a function critical to life, the animal dies.

“Animals typically die within 6-8 weeks of showing symptoms,” McKinley said. “They spread the disease even when they show no symptoms.”

After appearing in Colorado and spreading in the West, it was first seen east of the Mississippi River in Wisconsin in 2002. That year, the Department of Wildlife, Fisheries and Parks, which regulates wildlife and hunting in Mississippi, began looking for the disease. The first positive in the state was detected in February 2018 in Issaquena County.

Strickland said every hunter in Mississippi and surrounding states has two good reasons for sampling the deer they harvest.

“Our state wildlife agencies can’t manage the disease to keep it from spreading if they don’t know where it is, and if you eat your venison, testing it first gives you peace of mind,” Strickland said.

He said the Centers for Disease Control and Prevention report that there have been no reported cases of CWD infection in people, but some animal studies raise concerns that there may be a risk to humans.

To keep CWD numbers in check, wildlife specialists have determined that the best management practices are to lower deer density and eliminate practices that encourage deer to congregate.

“This is why the state’s regulatory agency allows more deer to be harvested in CWD zones and why supplemental feeding is eliminated in these areas,” Strickland said. “High concentrations of infectious prions are found in saliva.

“Supplemental feeding does not cause CWD, but it facilitates its spread as deer concentrate in certain areas, such as around a feeder,” he said.

Infection rates in other states have shown that the disease does not go away and spreads widely if left unmanaged. Without a cure, CWD is devastating to the deer population and to hunters who depend on deer for food or sport.

“If ignored, the disease will reach the point of no return in localized areas,” Strickland said.

McKinley said inactivity is not an option.

“We must change our hunting and deer management behavior, because if we do nothing, we end up with prevalence so high that the disease manages the herd for us,” he said. “Our goal is to keep CWD at a low prevalence in Mississippi.”

When CWD is unmanaged, few deer live to reach the older age classes. Trophy bucks with boast-worthy antlers could become a thing of the past.

“Areas of Wisconsin have half the deer positive for CWD, and very few live into older age classes,” McKinley said. “Illinois took steps early to reduce deer density, and they managed to keep prevalence well under 5% compared to Wisconsin’s localized areas of 50%. Illinois has not removed CWD from the landscape, but they keep it under control by targeting those areas where the disease is prevalent.”

Wildlife specialists are confident that Mississippi hunters can learn to manage the deer herd in the state to keep CWD from reaching high levels.

Hunters are encouraged to bring the heads of all deer harvested for free testing at one of 46 drop-off sites across the state. Store the meat in coolers before processing until CWD test results are back, a process that usually takes about a week.

“Many areas of the state are not well sampled, so we cannot rule CWD out in those areas,” McKinley said. “We have many counties that have only turned in six or eight deer over an entire season, so we don’t know if CWD is in that area or not.”

When handling deer, such as when field dressing a harvested animal, wear latex gloves and minimize contact with the nervous system — the brain and spinal column.

“That’s where the highest concentrations of prions are found,” McKinley said. “If you like to saw off the antlers, we recommend you keep that tool separate to prevent possible cross contamination.”

Find more information about CWD and its management and testing at http://mdwfp.com/wildlife-hunting/chronic-wasting-disease. A map shows drop-off locations and times. There is also an app to help hunters with this process.

“We cannot manage this disease without hunters. If we don’t have their cooperation, the disease wins,” McKinley said.

EDITOR’S NOTE: This article is the first in a three-part series on the history, impacts and management of chronic wasting disease in white-tailed deer. The series will be available at http://extension.msstate.edu.