Hurricane Ida barreling toward US, may approach Gulf Coast as Cat 4 storm 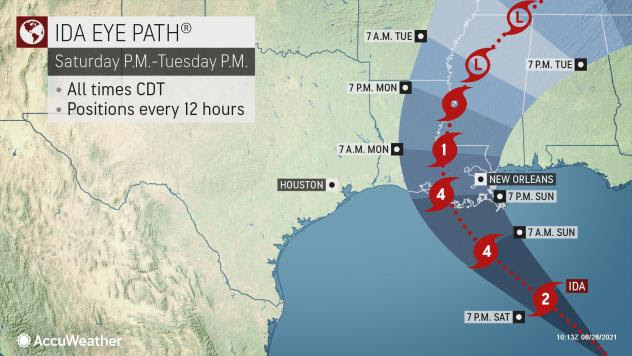 AccuWeather Global Weather Center – August 28 –  Hurricane Ida, after making two landfalls over western Cuba later during the day on Friday, was barreling into the southeastern Gulf of Mexico. AccuWeather forecasters warned that Ida, headed over exceptionally warm waters, was likely to rapidly intensify and approach the U.S. coast as Category 4 hurricane. Meteorologists warned residents along the central Gulf Coast that time is running out to prepare for the storm or evacuate the storm’s projected path.

Late Friday afternoon, the NHC issued hurricane warnings for parts of coastal Louisiana including New Orleans. Storm surge and tropical storm warnings were in effect for parts of the Louisiana coastline as well as across the border into Mississippi and Alabama on Friday as concern mounted about the potential for Ida, which had just strengthened into a hurricane early Friday afternoon, to strike as a major hurricane on Sunday. AccuWeather forecasters, expecting extreme impacts for the Gulf Coast, have rated Ida a 4 on the AccuWeather RealImpact™ Scale for Hurricanes.

Louisiana Gov. John Bel Edwards declared a state of emergency Thursday due to the potential impacts from the hurricane. He also called on residents to heed the warnings. “Now is the time for people to finalize their emergency game plan, which should take into account the ongoing COVID-19 pandemic,” Edwards said.

In New Orleans, many residents were already taking to the stores to stock up on food and supplies. AccuWeather forecasters are projecting Ida to make landfall on Aug. 29, exactly 16 years to the day since Hurricane Katrina, a Category 3 storm, made landfall twice along the Gulf Coast, resulting in widespread devastation.

New Orleans Mayor Latoya Cantrell late Friday afternoon called for mandatory evacuations for areas outside the levee system, saying those people would need to evacuate by Saturday morning. However, the National Weather Service and Louisiana Gov. John Bel Edwards indicated that there was no time for even implementing contraflow, Cantrell said in an evening press conference on Friday.

“Therefore, the city cannot issue a mandatory evacuation because we don’t have the time,” Cantrell said, advising for residents to either voluntarily evacuate or hunker down.

On Friday evening, the president of St. Charles Parish announced that the entire parish would be under a mandatory evacuation order, beginning at 6 a.m. on Saturday. Residents are required to leave the parish by 5 p.m. at the latest.

As of 5 a.m. EDT Saturday, the hurricane was moving to the northwest at a speed of 16 mph and had maximum sustained winds of 80 mph. Ida was 185 miles southwest of Havana, Cuba.

The storm was stronger and larger in size on Friday compared to Thursday. Not only were winds increasing, but hurricane-force winds extended up to 25 miles out from the storm’s center. And tropical-storm-force winds also extended outward up to 90 miles (150 km) from the center, up from 70 miles (115 km) when the storm was named.

The latest forecast from AccuWeather meteorologists indicates that the storm will continue to increase in strength and take a path into the central Gulf of Mexico. AccuWeather forecasters expect Ida to make landfall at Category 4 force, meaning sustained winds of 130-156 mph, but warned that due to the rapid intensification, Ida could become a Category 5 hurricane prior to landfall.

An area of high pressure near the Carolina coast is forecast to weaken just enough to allow the storm to move northwestward into the United States. The remaining circulation around the high is likely to be enough to keep the storm moving along while over the Caribbean and the Gulf of Mexico.

The storm is projected to slice across the warm waters of the Gulf of Mexico, where rapid intensification is possible, as has been the case with several notorious storms in recent years such as Hurricane Michael in 2018, which struck the Florida Panhandle, and Hurricane Laura in 2020, which slammed southwestern Louisiana. There were a record 11 named storms that struck the U.S. in 2020.

So far this season, five named systems have reached land in the U.S., but none were hurricanes at the time of landfall.

AccuWeather forecasters are warning residents and businesses from the Texas coast to Louisiana and the panhandles of Mississippi, Alabama and Florida, as well as fishing and petroleum operations, to closely monitor the progress of the intensifying storm and heed all warnings and evacuation notices from officials as Ida will strengthen rapidly along its path toward the U.S. Gulf Coast.

Water temperatures in the Gulf will play a key role in allowing the tropical system to intensify rapidly.

“The atmospheric environment is expected to rapidly become more conducive for this system to organize and strengthen,” AccuWeather Senior Meteorologist Rob Miller said.

Sea-surface temperatures in the northwestern Caribbean and Gulf of Mexico could aid a strengthening storm, as they are well into the 80s F in many areas.

“Not only is there warm surface water along the projected path of Ida, but there is deep warm water in that zone,” AccuWeather Chief On-Air Meteorologist Bernie Rayno said. That can help to counteract any cooling of surface waters that can occur due to the storm’s wave action.

The central pressure of a hurricane can drop off more readily when it is over warmer water. As a result, the storm can become even more powerful, AccuWeather Hurricane Expert Dan Kottlowski explained.

While over the Gulf of Mexico this weekend, additional rapid strengthening is likely with the potential for the system to become not just a hurricane but perhaps the second major hurricane, which is Category 3 or higher on the Saffir-Simpson Hurricane Scale, of the Atlantic season. A major hurricane has maximum sustained winds of 111 mph or greater. Thus far, Grace has been the only hurricane to reach Category 3 force, with maximum sustained winds of 125 mph just prior to striking Mexico for a second time on Aug. 21.

The pace at which the system ramps up may determine where it makes landfall along the U.S. Gulf Coast.

People along much of the Louisiana coast, including the city of New Orleans, as well as coastal areas of Mississippi, Alabama and the western portion of the Florida Panhandle should be prepared for significant and dangerous impacts from Ida. Some roads may become blocked by rising water, fallen trees and other debris as the hurricane approaches and moves inland. Widespread power outages are expected along the central Gulf Coast and Mississippi Delta regions.

“The greatest impacts of a northward-moving hurricane will be felt not only near the eye, but also on the storm’s northern and eastern side in general,” Kottlowski said. For this reason, significant impacts in terms of storm surge flooding, torrential rain, high winds and severe thunderstorms can occur well in advance of and well to the east of where the eye pushes inland.

Rough seas are expected to build outward from the south-central Gulf to much of the Gulf Coast and offshore waters beginning on Saturday. Depending on the exact track, size and strength of the storm, conditions may rapidly deteriorate. Wind gusts of 40 mph or greater and the first bands of heavy rain and thunderstorms can arrive as early as late Saturday night or early Sunday morning along the Louisiana coast — and the stormy conditions will spread inland and eastward from there.

“Near where the center of the storm moves ashore, wind gusts of 115-120 mph are possible and an AccuWeather Local StormMax™ of 180 mph is anticipated,” AccuWeather Meteorologist Randy Adkins said. Hurricane-force winds of 74 mph or greater are anticipated along much of the Louisiana coast and may extend inland as far inland as northern Mississippi and southeastern Arkansas.

Due to the expected size and power of Ida, Gulf of Mexico waters will rise well in advance of the storm’s arrival near the coast, which is expected later Sunday or Sunday night. Forecasters caution that bay, lake and bayou water levels will increase as well. Some low-lying roads along the coast may begin to take on water as early as Sunday morning or perhaps Saturday night.

The heaviest rainfall, with a general 4-8 inches, is forecast to fall across much of Louisiana, western Mississippi and southeastern Arkansas. In central Louisiana and in parts of southeastern Louisiana, rainfall amounts can be even higher with 8-12 inches and an AccuWeather Local StormMax™ of 20 inches projected.

Louisiana, which may end up in the crosshairs of the latest budding tropical system, was heavily targeted by direct strikes during the record 2020 Atlantic hurricane season. Tropical Storm Cristobal, Category 4 Hurricane Laura, Category 2 Hurricane Delta and Category 3 Hurricane Zeta all made landfall in the state, but Hurricane Marco had weakened to below tropical depression status prior to moving ashore.

Through late August, four tropical storms — Danny, Elsa, Fred and Henri — have made landfall on U.S. soil. And back in early June, Tropical Storm Claudette impacted the U.S., but in an unusual meteorological twist, it was named a tropical storm by the NHC while it was over Louisiana, so it never made a traditional landfall.