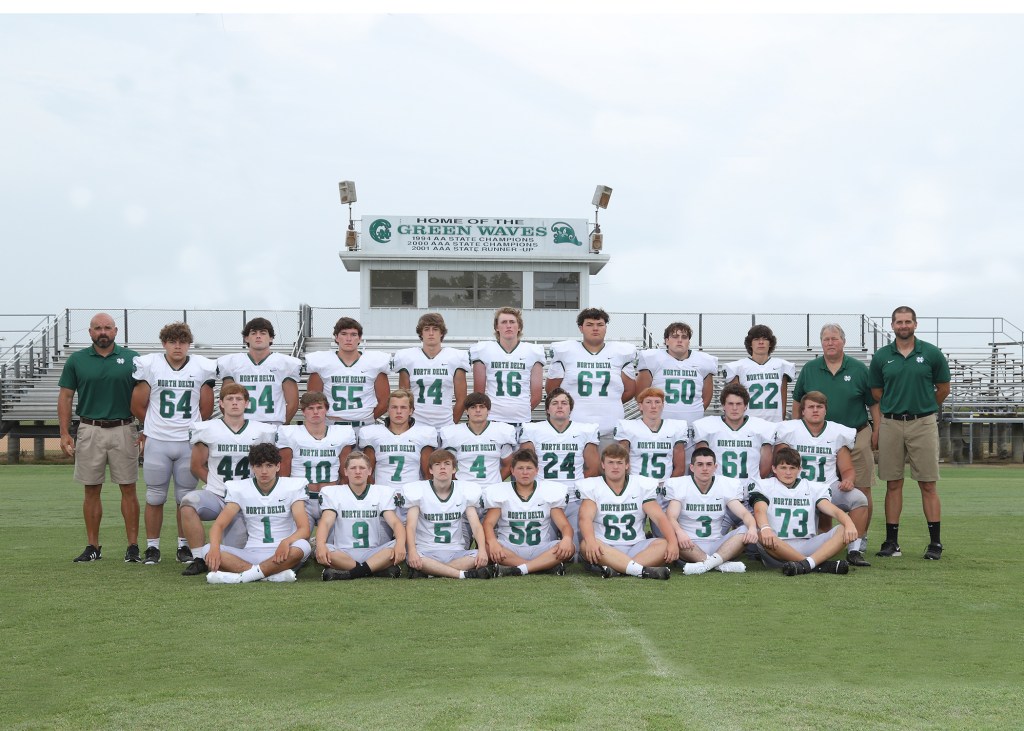 Coming off a district championship season in 2020, the North Delta School Green Wave will have a bullseye on their backs leading into the 2021 football season.

North Delta must replace 10 seniors off last year’s 8-3 squad and lost to Brookhaven Academy in the first round of the Class 4A State playoffs include three-year starting quarterback Ryan Gibson along with Hawk Aldison and Drake Barton.

The cupboard is far from bare as the Green Wave returns a solid nucleus thanks in part a big junior class plus a mix sophomores that will be thrown into the mix and will see valuable playing time.

“We have very good core group of kids coming back. Our sophomore class is not very big, but we’ve got 14 juniors that has been together for awhile so we definitely like who we have returning. Our biggest issue right now is depth,” said North Delta head coach Mac Aldison.

The Green Wave had 23 players report to pre-season practices with five seniors and four sophomores doting the roster.

Senior Nolan Long returns to anchor down the offensive and defensive line along with fellow classmates Aden Sykes and wide receiver/defensive back Layton Wells. Sykes could also see playing time at the running back position.

“Nolan is a big kid that has turned into a really good player for us and Layton has put on about 20 pounds from last year and has worked really hard in the weight room. Aden will play tight end and defensive end. We will look for Martin Wolfe to run the at times. Alton Lee didn’t play a lot last year because of knee issues, but we will look for him to start at the center position,” said Aldison.

The Green Wave returns seven starters on defense including Wolfe, Ridge Aldson, Sykes and Max Michael. Look for juniors Britt Robertson and Stiles Rowland to fill in at the linebacker spot.

Aldison continued to say the defensive line and secondary will be the strength of the team with Lewis Smith, Matt Johnson and Wells roaming the backfield.

Smith will replace Ryan Gibson at quarterback, but Aldison says he has all the confidence in the junior who will also handle the place kicking duties.

“Lewis has some big shoes to feel, but we are excited about him and will know he can be in charge of our offense. He is very athletic and a very hard runner that has been working hard all summer,” said Aldison.

Levi Gee will look to be the workhorse in the backfield along with Robertson, Johnson and Wolfe.

Wideouts will include Wells and six-foot-four junior Semmes Dorrel.

North Delta welcomes district newcomer Oak Hill Academy along with Kirk, Clarksdale Lee Academy and Marshall Academy. The Wave will face a tough non-district slate with the lacks of Pillow and Greenville St. Joseph who is ranked No. 2 in the preseason 4A Poll with Clarksdale Lee coming in at No. 5 according to mississippigridiron.com.

Joining Aldison on the coaching staff is assistants Colt Aldison and Benji Pierce.