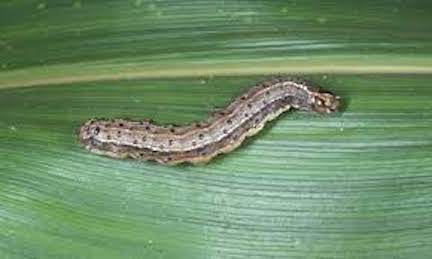 They fly over from South America every spring and wreak havoc on people’s yards every summer and fall.

Armyworms are back in Mississippi. And in Batesville, homeowners are reporting their lawns are being eaten while city employees are battling outbreaks at several locations. Especially damaged was grass at the Batesville Mounds where large swatches of dead grass can be seen.

Parks and Recreation director Heath Fullilove said the department found the damage early this week and had all the area treated by Tuesday. The invading worms were killed with insecticides and the grass will have no long-term damage.

Despite the name, an armyworm is actually a caterpillar that grows into a moth. Lewis said they remain in their caterpillar stage for about 10-14 days and do most of their feeding in the last two to three days. He said this could cause serious problems for those in hay production.

“A producer can be riding around looking at hayfields ready to harvest, and two to three days out from harvest, they can be bringing equipment to the fields, and basically most of their production is gone,” Lewis said.

Aside from hay fields, they also like Bermuda grass and turf. He said one of the first signs that armyworms might be in your yard is if you start noticing small patches of dead grass.

“Scouting is probably the best preventative method,” Lewis said. “You have to sometimes get down on your hands and knees and crawl around and part the grass and look.”

There is not a whole lot you can do to prevent them from invading your yard, but Lewis said homeowners and farmers could get rid of them with certain chemicals.

“We use some pyrethroids, permethrins, spinosad,” he said. “You get over into the pasture side, and there might be some other products you may need to throw in there with a tiny mix.”

Lewis said he is not really sure why they are worse this year. Since they can’t survive the winters in Mississippi and fly in from further south as a result, he said they are hard to predict.

To learn more about how to combat armyworms, he said to visit Mississippi State University Extension’s website.