Mayor, board compromise on Code Office 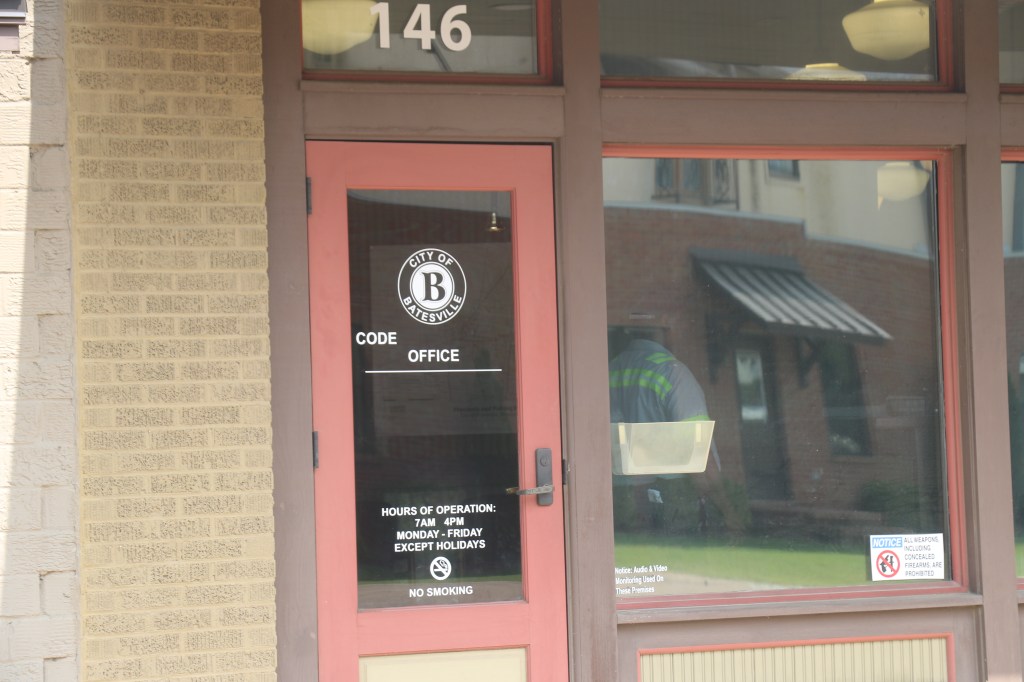 Mayor Hal Ferrell, who campaigned in part on the idea that he would reform parts of the City of Batesville’s Code Enforcement Office, wasted little time in attempts to make changes at his first board meeting held Tuesday, July 5, at City Hall.

Less than 30 minutes into the meeting, Ferrell addressed Andy Berryhill, the Chief Building Official for the city, and administrative head of the code office.

“I’m going to tell you, Andy, I want to help you, but I  want to tell you some things that I want to get done, and some things I don’t like,” Ferrell said. He then displayed photos of different parts of the city where codes were currently not being followed.

One of the photos was of a residential blue garbage can laying on its side near the street. “This is on Eureka Street behind Swindle’s,” he said “It’s been there at least a month. Somebody from the code needs to be riding, looking for our own properties that we have. We’ve got to set an example of what needs to be taken care of.”

Berryhill said his office would address the areas displayed immediately, and assured the mayor he welcomed any help that could be provided, including information about any property in the city limits that needs code adherence.

“That is our department’s intent, and that’s the scope of every building code we have is to help protect the life, safety, and welfare of the general public,” Berryhill said.

Ferrell then turned his attention to the name of the office, asking aldermen to consider officially changing the name from Code Enforcement Office to Code Office.

Berryhill said he and others wondered who had removed the word enforcement from the door, and asked the mayor to consider having the remaining words realigned for uniformity. Ferrell said he was fine with the words being lined up to read Code Office more clearly.

Ferrell said the word enforcement could be perceived as threatening to the general public, who should find communication and help from code officials without enforcement being part of interactions.

Aldermen pondered the mayor’s suggestion for a few minutes before agreeing that the word enforcement could easily stay off the office door to no ill effect, but removing enforcement from the vehicle used by Barry Thompson in that office would lessen the authority of the office and defeat the purpose of code enforcement at its every base.

“We hired Barry as a code enforcement officer, and he’s a person who is a law enforcement officer and that’s what we intended,” said alderman Stan Harrison. “There’s certain situations where Barry needs to go as a police officer, not very often, but sometimes.”

Both Berryhill and Thompson have the same police certification required of BPD officers, and may both be legally armed at all times. Thompson has worked at the police department and Sheriff’s Office, at different times, for more than 20 years.

The mayor said Thompson or other code officials could take an officer from the police department when a threat existed, but aldermen nixed that idea, saying the whole point of employing Thompson was to keep the habitually short-staffed police department from pulling patrolmen off the streets to handle code office business.

“I don’t have a problem with changing the name from Code Enforcement Office to Code Office, but we need to think about all the items that have Code Enforcement written on them,” said alderman Teddy Morrow.

Ferrell said if the board would approve the name change he would support the expenditures necessary to print new forms, stationary, logos, and get new uniforms for the employees with the word enforcement taken off the name.

Board attorney Colmon Mitchell pointed out the fact that many current city ordinances make reference to the Code Enforcement Office, and a new ordinance will have to be drafted and adopted that makes clear the official name change and the board’s intent that all current ordinances with the word enforcement would, going forward, be legally covered by the same office with a different name.

“We don’t want to have ordinances that reference an office that doesn’t exist,” Mitchell said, adding the usual 30 day waiting period from the time of the ordinance approval would have to be observed before it becomes part of city statute.

The compromise between the mayor and aldermen was acceptable to all the board table, and in the future the office will be known (on the door and paperwork) as the Code Office while Thompson will continue to carry a sidearm and carry out his duties in a vehicle clearly marked as law enforcement.

In other business, Ferrell briefly addressed the matter of his salary, as set by the aldermen. The mayor noted his disapproval that one of the last actions taken by the board in June before he took office the board reduced the salary from approximately $59,000 to $53,000.

Ferrell said he wasn’t complaining about the salary, but thought it was improper for the board to reduce the salary.

Ferrell countered that Autrey began his term 16 years ago, and that should have also been a consideration. No one made a motion to increase the salary for the mayor to match what the former was being paid, and the matter wasn’t discussed further.

One other notable highlight from the meeting was Ferrell’s suggestion the city attempt to negotiate the recently signed contract between the City of Batesville and Panola County for the collection of residential and commercial garbage in the city.

Attorney Mitchell addressed the matter, saying he would research the question, but didn’t have much hope for a positive outcome.

“There’s a way to go back and negotiate, but usually it takes place before the bid is accepted so there’s probably not a whole lot we can do,” he said.

The Mayor and Board of Aldermen will meet again Tuesday, July 19, at 2 p.m. The public may attend the open meeting held at City Hall.