Summer to arrive early as heat wave sets in on Southeast 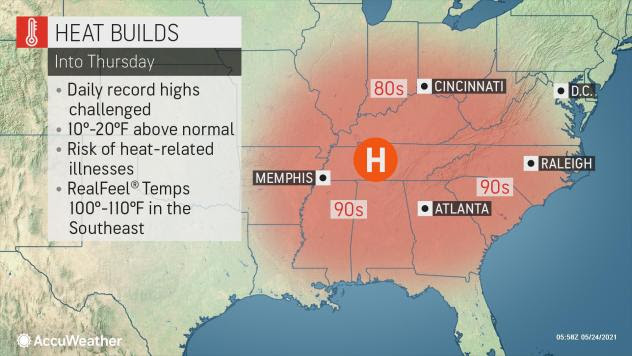 Temperatures have already been on the rise over the past few days across much of the southeastern U.S. AccuWeather forecasters say it’s just the beginning as much of this week will feature mid-summer level heat and humidity, some of which could break some daily records for late May.

While temperatures will peak in the 90s for many each afternoon, RealFeel® Temperatures will top out in the 100s for many of the same areas as the combination of sunshine, light winds and some humidity make it feel even hotter. To learn more about the RealFeel Temperature, you can click here.

“The heat will challenge daily record highs for several days in a row in cities such as Charlotte and Raleigh with afternoon highs around or even slightly above what they normally peak at in July or August,” said AccuWeather Senior Meteorologist Dan Pydynowski.

Places like Savanah and Atlanta, Georgia, and Nashville, Tennessee, will also be in the midst of the heat wave through much of the week.

As a slow-moving storm brought cold air and snow to parts of the West and severe storms in the Plains over the weekend, heat has been pumped into much of the eastern U.S. over the past several days. As high pressure remains over the area this week, the heat will persist, leading to a full-fledged heat wave. High temperatures will climb well into the 90s and some communities will challenge daily high temperature records for late-May. A few hot spots may approach the 100-degree mark.

For many, the heat will peak Wednesday and Thursday, bringing the greatest chance for temperatures to break daily record highs. However, a bit farther northwest, from Nashville into the Ohio Valley, Tuesday and Wednesday are expected to be the hottest days before the heat is trimmed.

Thursday is forecast to be one of the hottest days of the week in Atlanta, when the record high of 95 will be challenged set way back in 1916. On Wednesday, Raleigh is expected to challenge their record high for that day of 94 set just a couple of years ago in 2019.

Columbia, South Carolina, could challenge record highs for three consecutive days from Tuesday to Thursday. The records to beat are 101 on Tuesday, 100 on Wednesday and 99 on Thursday. Columbia is currently forecast to reach the upper 90s on all three days.

As the actual temperatures will soar this week, AccuWeather RealFeel® Temperatures will climb even higher, adding to the heat, as well as the hazards that can come from it.

“While temperatures will resemble mid-summer, and humidity will increase some, humidity will still remain relatively low compared to mid-summer. This will help keep RealFeel Temperatures from climbing even higher, but those spending time outdoors will still need to be careful to protect against heat-related illness,” Pydynowski said.

Those who will be spending time outdoors when the heat is most intense, from the late morning to mid-afternoon hours, will want to make sure to take necessary precautions like staying well hydrated, taking frequent breaks, staying in shaded areas as much as possible as well as using proper protection to prevent sunburn.