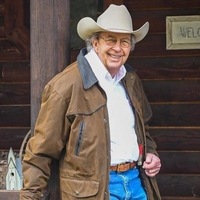 A graveside service was held Saturday, March 6, at Chapel Hill Cemetery in Pope. The family received friends prior to the service at the cemetery.

Woody was born May 6, 1944 in Pontotoc, to the late Woodrow Wallace and Ruby Wilma Cummings Clifton. Woody and Sue were members of Nye Community Church in Nye, Montana.

Woody retired six years ago from a lifetime as an award-winning construction manager, working with international companies such as Bechtel, Rust, and Washington Group/URS.

His awards for jobs fill boxes but when Sue, proud of her husband’s accomplishments, tried to display them in their Mississippi home, Woody showed the character his friends and co-workers respect by telling Sue he did not want his awards displayed or “people will think I’m bragging.”

In his personal life, Woody enjoyed fly fishing and western horsemanship. In the late 80’s, Woody taught Sue to fly fish. Together they fished the major fly fishing streams in Montana, Wyoming, Arkansas, Southeast Alaska, and New Zealand, using their river boat and drift boat when they could no longer wade streams.

Woody’s love of horses and all things western was obvious by Woody wearing cowboy boots and hats. Woody worked with their children Tracy, Jeff, and Niki in showing quarter horses when they were pre-teens and teens. Woody and Jeff trained quarter horses in Mississippi and New Zealand for personal recreation.

Along with his parents, Woodrow and Wilma Clifton, Woody was preceded in death by his son Tracy Clifton and his brother Bill.