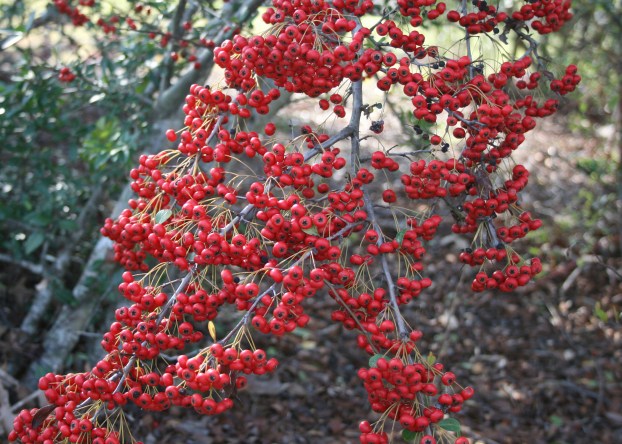 PYRACANTHA -- While Pyracantha has plentiful red-orange berries that resemble tiny apples, it also has painful thorns on almost all the branches. (Photo by MSU Extension/Gary Bachman) Alt text -- A small, bare branch is covered by hundreds of tiny red berries. ###

Natural decorations can be breathtaking

PYRACANTHA — While Pyracantha has plentiful red-orange berries that resemble tiny apples, it also has painful thorns on almost all the branches. (Photo by MSU Extension/Gary Bachman)

Poinsettias are being bought, Christmas trees with ornaments are going up, and lights and inflatable figures are on display around our homes as people get ready for the holidays.

While most of these holiday displays are quite stunning, some of the most beautiful are those designed by Mother Nature.

I look forward every winter to those landscape plants that are beautifully decorated with their brilliant red berries. Let’s take a look at a few of my favorites.

Savannah holly is a hybrid of the Mississippi native hollies, American holly (Ilex opaca) and dahoon holly (Ilex cassine). It is known botanically as Ilex x attenuata. This holly is versatile in the landscape and is used for specimens.

Savannah hollies are moderately fast growing and are actually small trees, reaching up to 35 feet tall. They have a natural, pyramidal growth habit that is loose and open.

These plants tolerate confined root zones because of their small root diameter and great number of roots. Cities often use Savannah hollies in median plantings, which is a testament to their toughness.

The foliage of Savannah holly is a dull light-green, and it has soft spines on the leaf edges.

The real show stoppers are the berries visible from November through March. The tight clusters of berries form towards the ends of the branches.

Pyracantha has colorful berries that add beauty to any winter landscape.

The botanical name for pyracantha means firethorn, for which it is commonly known. This plant certainly lives up to this name with sharp, painful thorns on almost all of the branches. I’ve had the thorns of pyracantha jab my hands straight through my leather works gloves, so be very careful handling this plant.

Its arching, branching habit is accentuated by the production of red-orange berries that actually resemble tiny apples. All the fruit is produced on the ends of the branches, which weighs them down until the berries seem to drip onto the ground. The fruit clusters are prominent from late fall all the way to spring.

Pyracantha is a suitable landscape plant all across Mississippi.

I like nandina because the foliage is attractive and three-way compound, which means it has distinct leaflets joined to a single stem that give it an almost tropical charm. The foliage in summer is green, but when the weather starts turning cold, the foliage transforms to rusty reds for the winter. Foliage color is more intense when the nandina is grown in full sun.

Nandina displays flowers composed of big panicles of white clusters, but in the fall and winter, the berries are the main event. The clusters of red berries start upright; as the berries mature, the clusters weigh down the canes. If nandina has any drawbacks, it is from its potential for some weediness from the heavy fruit production.

This Christmas, I hope you enjoy nature’s landscape decorations as much as I do.