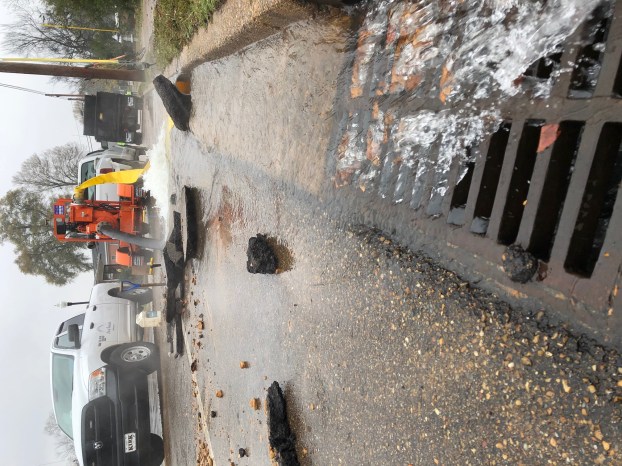 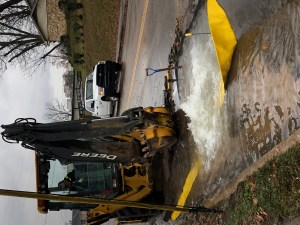 The City of Batesville Water Department has worked all day to repair a major water line break on Eureka Street.

City workers were called about 2 a.m. Thursday when a small geyser of water was discovered shooting from the ground about where Batesville Dental Clinic is located at 113 Eureka. Since then Eureka has been blocked as the Water Department has worked to control the high pressure break.

Water service was off for most of the Downtown and central Batesville area until about 6:30 a.m. when workers were able to open some valves and restore service while trying to locate a main valve that would stop the gushing water and allow for repairs.

The broken line is located in one of the oldest parts of Batesville and much of the underground utilities in that area are not mapped. Water Department employees are basically using the same system to locate a main valve that children use to hunt for Easter eggs -mostly looking for something that is hidden until it’s found by chance.

As a result of the leak, the Water Department said about noon that water service would be completely shut off to the area about 1 p.m. School officials in turn made the decision to dismiss all South Panola Schools – except Pope School – early because students and staff on the campuses located on College Streets would have no water.

Once South Panola begins its daily bus routes, students at all the school in Batesville must be picked up to avoid making extra trips and getting students home hours after school is dismissed.  Pope School operates independently on bus routes.

South Panola’s website said the schools would be dismissed at 1:30 p.m.

Main Street Program hopes to bring light into a dark time. By Carrie Stambaugh The Billion Lights of Batesville is... read more