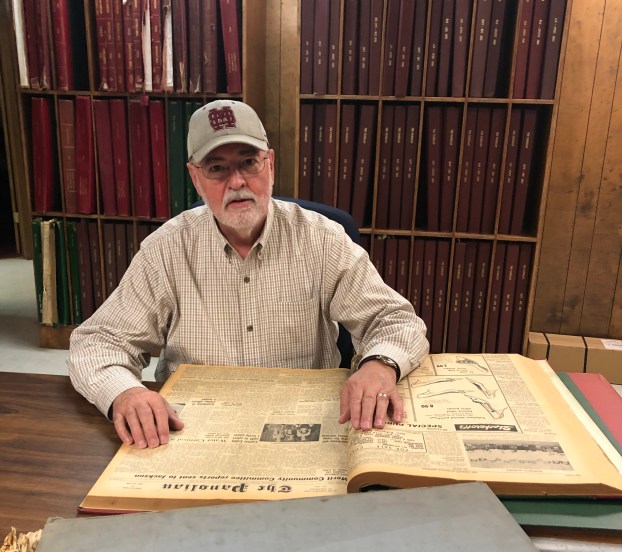 Bill Phillips enjoyed reading the news accounts of his run for mayor of Batesville as a freshman at Mississippi State.

Former Batesville resident Bill Phillips stopped at the newspaper office last week with his wife Susan. They were visiting the city and its landmarks during the Thanksgiving break as part of research Phillips is doing for an upcoming memoir about his life growing up here and his unique part of the city’s history.

Phillips, who hasn’t lived here since he graduated South Panola High School and left for Mississippi State University in the fall of 1972, has no relatives in Batesville and hasn’t been to the city in many years.

Still, he was quickly able to use The Panolian’s archived bound volumes to find the news coverage of the Batesville mayoral race in 1973, in which he qualified while a freshman at MSU. He campaigned on weekends and got just enough votes in the Democratic primary to cause longtime Mayor Dan L. Ferguson to miss the runoff and lose his re-election bid.

“I’m sure Mayor Ferguson was a nice person, but I remember that all the young people were unsatisfied with the old guard mentality, and I was somehow drafted to run for mayor when I was 17. I turned 18 during the campaign so I would have been able to hold the office if I won,” Phillips remembered.

Phillips said he took the campaign seriously and a friend helped him draft a platform and campaign. He and his friends were involved in the campaign for Civil Rights at the time, and he had attended a couple of speeches and marches to see Rev. Martin Luther King, Jr., and others of the era.

“We were very much aware of what was going on politically in the country and in our hometown,” Phillips said. “We wanted to make a difference.”

Phillips was able to search the bound volumes and find a quarter-page advertisement he placed that outlined his platform and why he should be elected.

“As far as I can remember no other candidate used an ad to make his platform public until me, but the week after my ad ran the others started putting their platforms in,” Phillips said.

Part of the ad placed by Phillips read:

“I propose, when elected, to make my first deed in office the establishment of a Youth Council made up of teens from all walks of life to aid me in discovering and meeting the needs of Batesville’s youth. Only the youth of Batesville can tell us what they want and need. Batesville’s youth can continue to smoke grass or speed up and down the streets or they can be given the chance through worthwhile entertainment to grow and become the future leaders Batesville wants and needs.”

The ad further said that he wanted to start a pollution program (unheard of politically at the time), industrial expansion, new medical programs, and women in government. It was signed Bill “Smokey” Phillips.

The nickname was earned, he said. Young Phillips had been caught smoking cigarettes by the high school football coach and was made to run track laps most of one day. “He kept yelling and asking me if I still wanted to smoke when I was about dead, and the nickname just stuck,” he said.

In the Democratic Primary, F.G. “Bub” Craig led the ticket with 576 votes, incumbent Ferguson got 335, Ligon got 347, and Phillips received 44 votes.

It was those 44 votes, some thought, that kept Ferguson from coming in second (he missed the runoff by 12 votes), and ending his 35 year run as Batesville mayor.

“I was happy to do it,” Phillips said, recalling the campaign was one of the most lively in recent years.

In the General Election, Bub Craig defeated James S. “Doc” Whitaker by a count of 795 to 397. It was the most votes that a Republican candidate, Whitaker, had received in Batesville since Reconstruction. 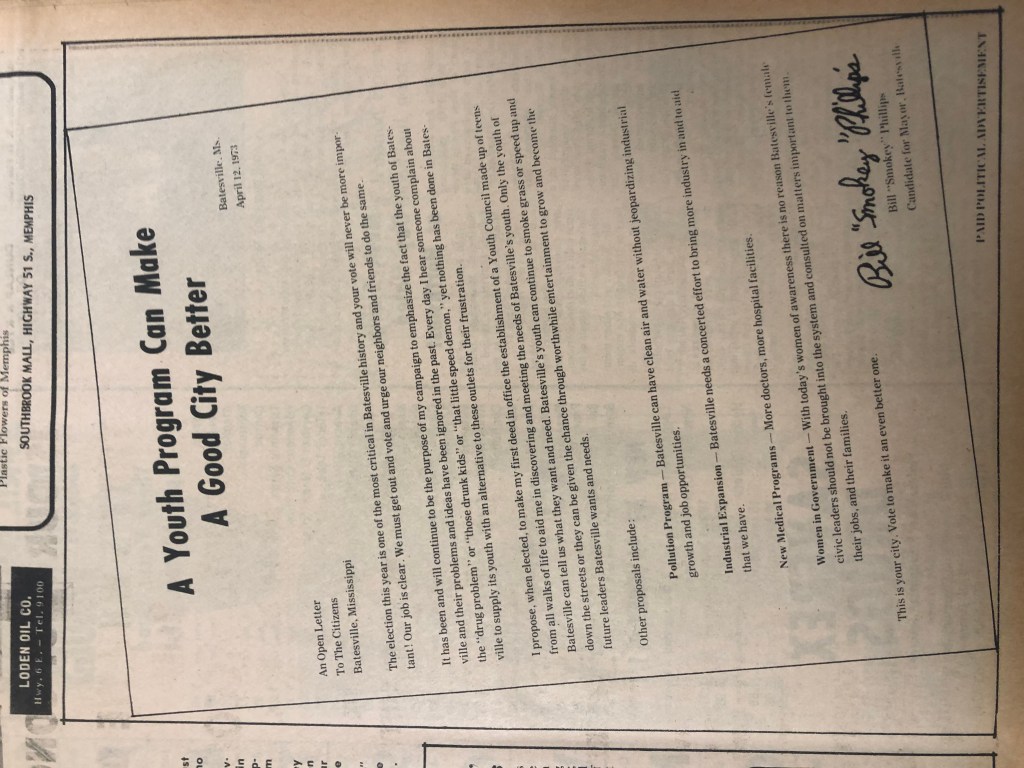 The 50th death attributed to Covid-19 was recorded in Panola County last week, according to the daily updates posted on... read more