A Sea of Blue procession wound through Batesville and to the Panola County Sheriff’s Department last week in honor of the late Chief Deputy James Rudd. (Glennie Pou). 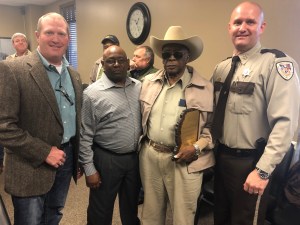 Former Panola County Chief Deputy James Rudd, 86,  was buried Friday, July 24, after a funeral service at Mt. Gillion M.B. Church. The service and family visitation held Thursday at Cooley’s Mortuary was attended by a large number of law enforcement officers and family and friends from across the county.

Rudd served as a Panola County deputy for more than 30 years and helped countless young officers begin law enforcement careers. He was widely-known and respected across all of the county.

Rudd was called out of retirement by the widow of the late Sheriff David Bryan during her interim appointment after his death.

Soon after current Sheriff Shane Phelps took office the department held a lunch in honor of Rudd’s career, and installed a plaque of appreciation for his many years of service to the people of Panola County.

Law enforcement personnel from a variety of local agencies showed their support for the Rudd family, and honored the deputy’s long career, with a Sea of Blue procession last week that included miles of vehicles with flashing blue lights and many citizens standing along the route to pay their respects.

Mt. Olivet incident still under investigation; no arrests have…