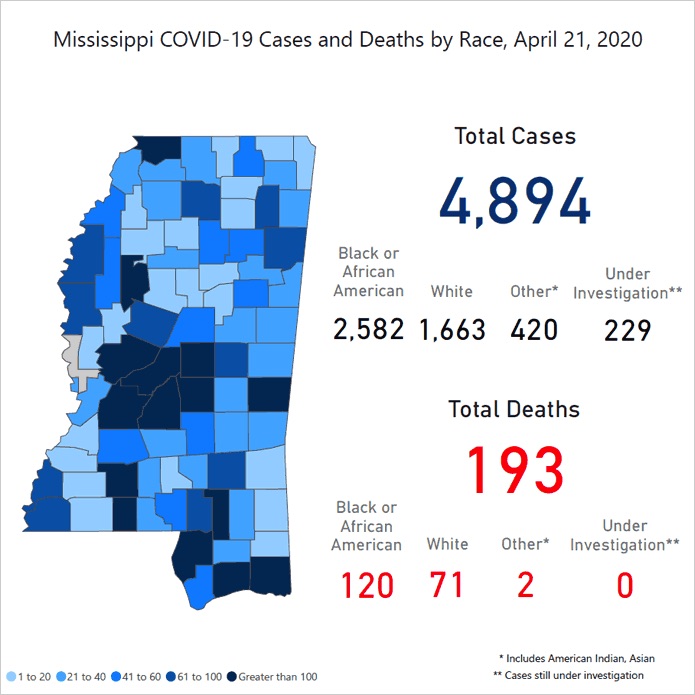 As of 6 p.m. on Tuesday, April 21, the Mississippi Department of Health reports there were 4,894 number of confirmed cases of COVID-19 in the state, and 37 in Panola County. The state began keeping the coronavirus data on March 11.

There have been several new cases of positive infection in Panola County in the past week, but not as dramatic as in some counties, especially those along the coast and near Jackson.

The total number of deaths announced at Wednesday’s update (numbers counted through Tuesday) was 193. In Panola, there have been just two deaths attributed to coronavirus. There have also been no reported outbreaks in long term care facilities, a statistic the state began keeping about two weeks ago.

MSDH also began reporting the number of cases and deaths by race last week. Statewide, of the 4,894 reported cases, some 2,582 have been black or African-American, 1,663 have been white, 420 were reported as other, and 229 remain under investigation.

In the death column, the state lists 193 as black or African-American, 71 as white, and 2 as other.

The data is available each day about noon on the website of the MSDH.

Gov. Tate Reeves is expected to announce Friday whether he will extend the state’s Shelter in Place order past Monday, April 27. Until then, Batesville will remain under a 9 p.m. to 6 a.m. curfew with limits on numbers of customers in stores, and all businesses except Love’s Travel stop closed during those hours.