A nurse at Panola Medical Center interacts Friday afternoon with the passenger of a vehicle at the drive-thru setup at the Batesville hospital. 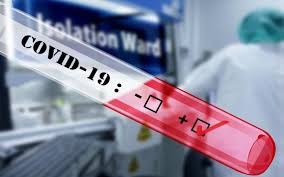 The drive thru testing area the State Department of Health officials had hoped to set up in the parking lot of the Batesville Civic Center by next week has been postponed without a completion date announced.

The county’s director of Emergency Operations, Daniel Cole, said Friday it’s simply a matter of lack of supplies and materials for testing pods at the state level that caused the postponement. He said Health Dept. officials have given him no reason to believe the Civic Center will not be a testing site in the next month.

Batesville and Panola residents are being directed by primary care providers, who screen patients for Coronavirus symptoms, to the emergency room parking lot of Panola Medical Center. There, hospital nurses meet the patient and the test is performed following CDC guidelines.

State news outlets have published video and photos of testing tents being set up at the State Fairgrounds in Jackson. Additional sites will eventually have tents and pods erected for testing, depending on the availability of materials.

There have been no new cases of positive tests reported since Wednesday in Panola County.

Panola Medical Center reported at 4:30 p.m. they have received 42 calls about testing today, and nine patients went through the drive thru with four tested.

The hospital is scheduled to issue another release later Friday evening.  It will be published when received .

Cole also said he has talked with people who are confused about the State Department of Health’s posting of confirmed cases by county, which does not show any cases for Panola.

It’s simply a matter of so much data being fed into the state’s system that it will take a few days to accurately document individual cases. A Panola County resident became the first local person to test positive. Officials received notification from the Health Dept. before 8 a.m. Wednesday of the first presumptive case of Covid-19 , and Cole made the news public about an hour later.

Some have complained that no more details of the positive tests have been released, and want officials to confirm in what part of Panola County the patient resides. Those details are private, and are dictated by national hospital and medical privacy laws.

In Panola’s first case, the patient was not swabbed in the county, and the sample tested was taken in another county. Until all the data is examined, the Panola County case will continue to be registered in another county.