Fallen constable remembered as professional officer, friend to all 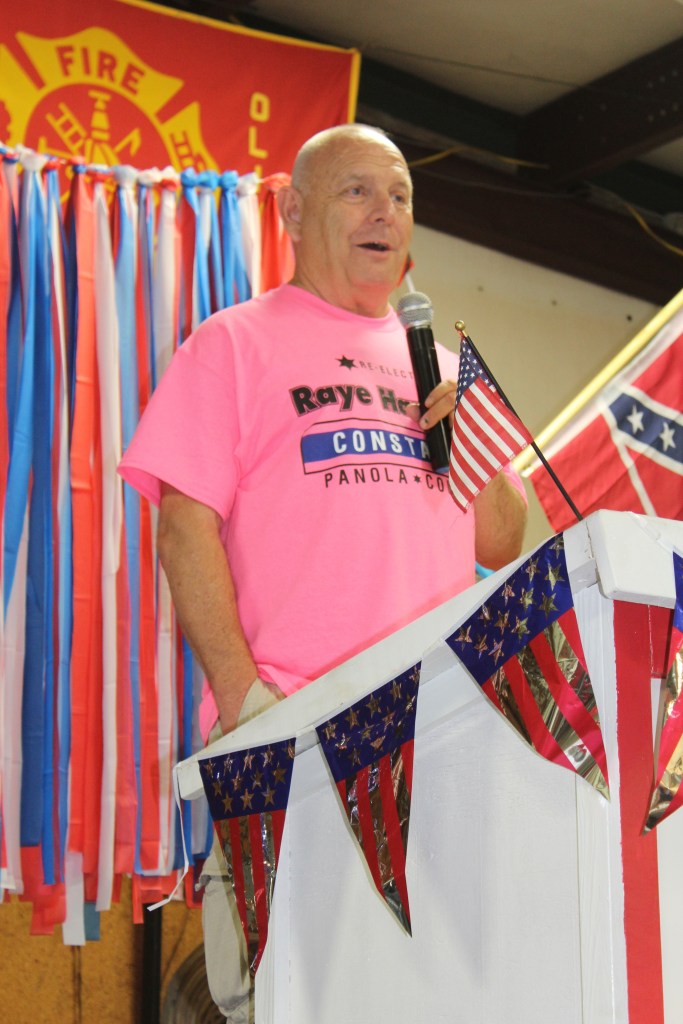 The late Panola County Constable Raye Hawkins at the Mt. Olivet Fire Department’s political rally July 20, 2019.  The MHP and MBI are investigating the events that led to his death in the line of duty Thursday afternoon on Hwy. 35S in Batesville.

Panola County is mourning the sudden death of Constable Raye Hawkins, killed in the line of duty about 2:30 p.m. Thursday.  Hawkins was assisting Batesville Police and local deputies who were attempting to stop the driver of a stolen vehicle as he sped into the city limits when the car veered to go around a deputy’s car and struck Hawkins almost head on.

The pursuit began in Tallahatchie County when two teens were reportedly spotted stealing a vehicle from a Charleston business. A Tallahatchie County deputy passed the car headed north toward Batesville at a high rate of speed, and turned around to pursue.

Authorities said the pursuing deputy was about a mile behind the stolen vehicle when it crashed into Hawkins’ car. In a press conference at the Batesville Police Dept. Thursday night, District Attorney John Champion said the constable’s car was mangled and the lawman died instantly.

At the press conference he also said the two teens – Darion Dagon, 16, and Johnathan Taylor, 15, have been charged with Felony Murder. Neither were injured in the crash. They were booked into the Panola County Jail and were scheduled to be taken to the DeSoto County Jail late Thursday night.

Hawkins, who began his law enforcement career as a Batesville patrolman in1990, before running for office, easily beat challenger Maurice Market in the General Election just more than a month ago.

Hawkins and Market had a friendly campaign and were often seen laughing and joking together at the political rallies held this summer and fall around the county.

At the Mt. Olivet Fire Department rally, Hawkins drew the largest applause of any of the candidates. When it  came time to give his stump speech, he stood on a chair wearing a bright pink campaign shirt and implored to crowd to “vote for me because I’m too old to get another job now.”

Batesville Police Chief Jimmy McCloud was emotional when he spoke about his friend and fellow lawman.

“Raye Hawkins was the kind of public servant that came to help anytime we had a problem in Batesville,” he said. “If he was in earshot of that radio when something happened he was coming to help.”

“He’s always been a part of this department. It’s just a heartbreaking, sad moment not only for the Batesville Police Department and the Panola County Sheriff’s Department, but the whole field of law enforcement.”

“We just ask that people pray and help us get through this moment. It’s always a tremendous loss anytime we lose a first responder,” McCloud said.

In a heartbreaking detail, McCloud confirmed that Hawkins’ son, an officer with the Batesville Police Dept., was one of the first to arrive on the scene. “It certainly made it worse for the family and for all the law enforcement family. We just ask that the public keep us in their prayers.”

Champion said that Hawkins was in the D.A.’s office just off the Downtown Square in Batesville working on other legal business when the call came in. He drove directly to Hwy. 35S, about where Compress Rd. meets the highway and was killed a few minutes later.

Panola County Sheriff Dennis Darby said he was stunned by the events of the afternoon. “Things like this are hard to believe right at first, but they happen. Raye was a professional law enforcement officer and did things the right way. That’s why everybody liked him. He could talk to anybody and people respected him because you could trust him to be professional,” Darby said.

“He was a great officer and more than just a friend. He was a buddy,” Darby said. “He will be missed all over Panola County.”

Champion said that events leading up to his death were not unusual for Hawkins. “He heard the call on the radio and left to go help, which doesn’t surprise anyone that knew him,” he said. “I’m devastated. I’ve been here 26 years and I’ve known him the whole time I’ve been here. It’s just an absolute tragedy that never should have happened.”

The Panolian will post additional updates Friday as the story develops.

Champion says two teens have been charged with Felony…