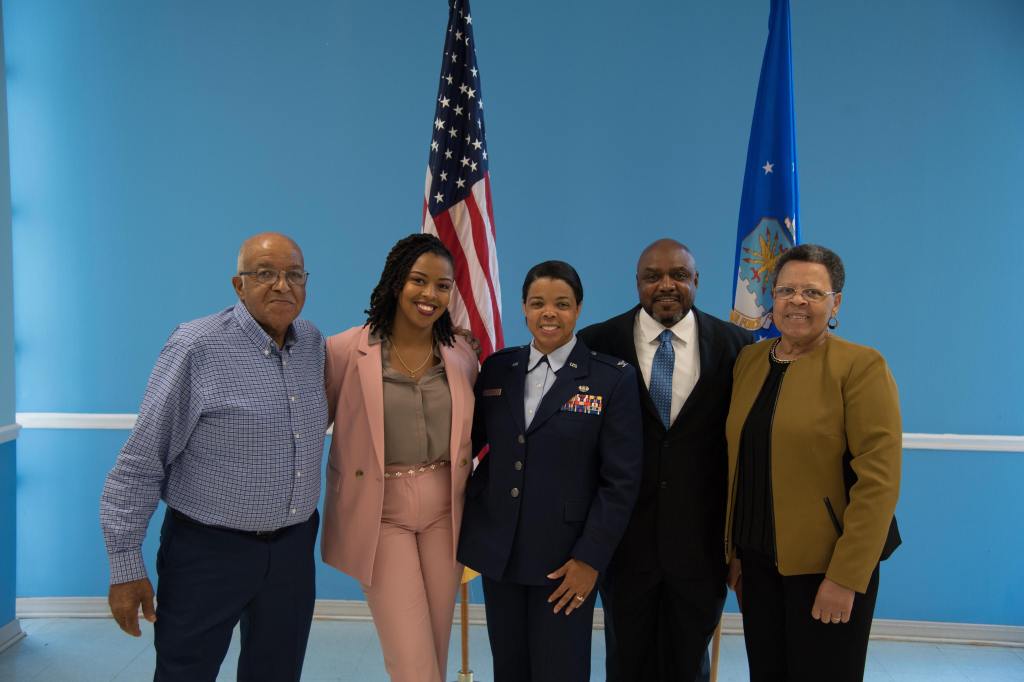 It was a proud day for the family of Panola County native Tammie Mckinney-Sledge as family members traveled to Barksdale Air Force Base in Louisiana, for her promotion to the rank of Colonel in the United States Air Force.

In this capacity, she provides legal advice to AFGSC leaders including supervision and oversight for AFGSC’s eight military bases.  AFGSC is home to the nation’s Minuteman III intercontinental ballistic missiles and the B-1, B-2 and B-52 bombers.

During her distinguished 19 years of service, Colonel Sledge has served in various legal roles.  Notably, in 2011, Colonel Mckinney-Sledge then Major Sledge received a Bronze Star Medal for her service in Afghanistan as the Staff Judge Advocate or lead attorney for the United States Forces – Afghanistan, Kandahar Detachment.

She also served as the Staff Judge Advocate for the 20th Fighter Wing, Shaw Air Force Base, S.C., and for the 377th Air Base Wing Kirkland Air Force Base, N.M..  She led legal offices of 25-30 attorneys, paralegals, and administrative staff.

Colonel Mckinney-Sledge was born in Sardis, and graduated as the 1990 valedictorian of North Panola High School.  In 1994, she received her bachelor’s degree in Political Science from Jackson State University.

In 1997, she received her law degree or Juris Doctorate from the University of Mississippi School of Law.  Upon graduating law school, Colonel Mckinney-Sledge served as a law clerk for now retired Circuit Court Judge Betty Sanders of Greenwood.  She was competitively selected to serve as a JAG and entered the Air Force in September of 2000.

Colonel Mckinney-Sledge is the daughter of Lawrence Sr. and Ethel Mckinney of Sardis, and the granddaughter of the late Green Sr. and Mary Parker Mckinney and the late William Hudson Wright and Edna Wright Miles.

Colonel Mckinney-Sledge was inspired to serve in the United States Air Force by her aunt, retired Major Jacqueline Reed of Sardis.

Panola County is even a good place to fall